This near-infrared, color mosaic from NASA's Cassini spacecraft shows the sun glinting off of Titan's north polar seas.
NASA/JPL-Caltech/University of Arizona/University of Idaho
By Jeffrey Kluger

Titan coulda’ been a contender. Saturn’s largest moon is a very distant, very cold place, -289º F (-179º C) worth of cold in fact. But even before the Cassini probe arrived in the Saturnian system in 2004, it was clear the giant world had unrealized potential. Its hydrocarbon atmosphere always suggested that had it been situated closer to the incubating warmth of the sun, it might have cooked up life. Indeed, astronomers long considered Titan a sort of flash-frozen version of the early Earth—back in the epoch when biology had yet to emerge but all of the ingredients for it were in place.

One other thing Titan was thought to share with Earth was the presence of oceans and lakes. The Titanian version would be filled with liquid methane and ethane instead of water, but the behavior of those bodies—freezing, evaporating, lapping up against shorelines—would be the same. When Cassini arrived, its radar scanners confirmed that these theories were true, and its infrared imagers have been returning better and better images of the lakes and seas—none so striking as the one above, just released by NASA’s Jet Propulsion Laboratory (JPL), which oversees the mission.

The image shows the region around Titan’s north pole, with the sun—more than 900 million miles (1.4 billion km) distant at the time the picture was taken—glinting off the sea known as Kraken Mare. Clouds farther north of the site are likely refilling the sea with rain—the methane and ethane variety again. Close analysis by JPL researchers has also revealed what they call a bathtub ring around Kraken Mare, the residue left over when some of the contents of the sea evaporated, reducing its overall size.

The north pole is not the only region of Titan that is home to lakes and seas; the southern extremes of the moon have them too, but not nearly as many. This, investigators believe, is due to greater volcanic activity occurring in the north, leaving the region scarred with divots. These then served as the basins that became the seas.

Nobody is seriously expecting to find life in the Titanian depths—unless it’s a form of life that needs no liquid water and can somehow survive the punishing temperatures of the deep solar system. But nobody minimizes the value of the science that’s coming back from Cassini either. If nothing else, studying Titan reminds us of how precise the conditions must be for biology to exist on any world—and how lucky we are that those conditions were met here. 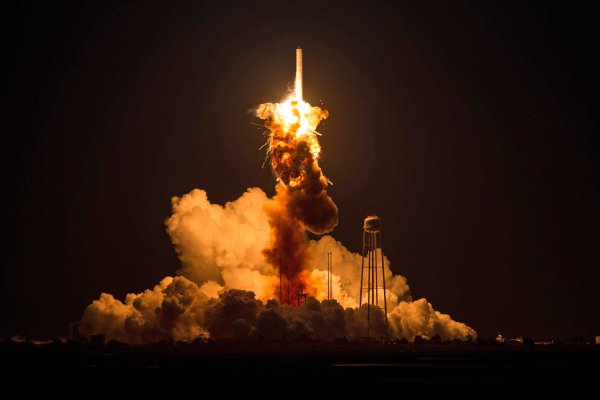 Operator in Rocket Blast Hit Self-Destruct
Next Up: Editor's Pick