Obama Campaigns in Maine, Away From the Spotlight

Five days before voters go to the polls to determine the outcome of the Senate, President Barack Obama was in the 41st most populated state wading into a contentious three-way race for governor. But even before he left, the modest nature of the trip on behalf of Democrats was readily apparent.

The airport was small, so Obama was relegated to a comparatively teeny modified Boeing-757 serving as Air Force One.

If any campaign swing captured the sorry state of the President before next week’s election, it was his five-hour exile to Maine on Thursday afternoon.

Obama’s first event was a private fundraiser for the Democratic National Committee at a remote mansion accessible only by a 10-minute drive down a one-lane gravel road. Inside 25 donors paid at least $16,200 to meet with Obama away from the scrutiny of the media. It was a familiar scene for the President who has devoted most of the year to raising money in private.

He followed it with a rally in a stuffy Portland gymnasium for Democratic Representative Mike Michaud, who is neck and neck in his challenge of Republican Governor Paul LePage.

Obama told the crowd he was “a little wistful” because “this is the last election cycle in which I’m involved as President, because I do like campaigning. It’s fun.”

The event was a far cry from the Obama campaigns of yesteryear, in which his soaring rhetoric and voter enthusiasm combined to cinematic effect. There were no stops for ice cream or coffee with candidates, or impromptu visits to local landmarks. Instead he delivered a rote speech highlighting his economic record and lambasting Republicans for failing to compromise. The message clashed with that of Michaud, who devoted his remarks introducing Obama to criticizing the state’s economy under LePage.

It was just Obama’s fourth rally for Democrats this cycle, with only a handful more planned before polls close on Tuesday.

“He has done everything we’ve asked,” Democratic Senatorial Campaign Committee executive director Guy Cecil said of the President on Thursday. They just haven’t asked for much other than to get out of the way.

From delaying promised executive action on immigration reform under pressure from vulnerable Senate Democrats to holding off on nominating a replacement to Attorney General Eric Holder, Obama has spent much of the past several months trying to avoid saddling members of his party with more baggage.

Earlier in October Obama unwittingly did just that, declaring, “I am not on the ballot this fall. Michelle’s pretty happy about that. But make no mistake: these policies are on the ballot. Every single one of them.” The line, uttered about Democrats’ policy proposals, not specifically his, quickly became campaign fodder for Republicans.

Obama has been essentially sidelined to a dual role of brining in donations and turning out a less-than-enthusiastic Democratic base, as his wife, First Lady Michelle Obama, and Vice President Joe Biden have vigorously stumped for candidates.

His only event on behalf of a Democratic Senate candidate this cycle will be this weekend in Michigan for front-runner Representative Gary Peters. 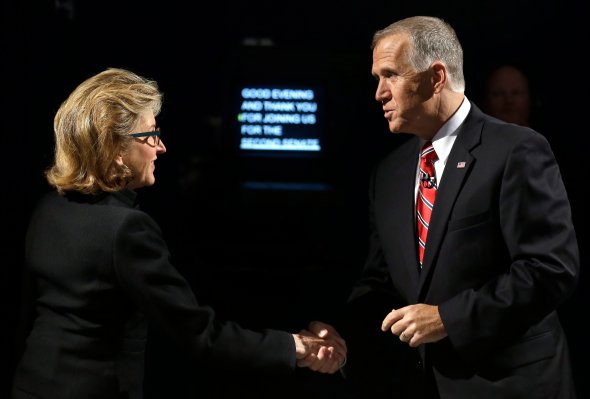