These 6 States Could Expand Medicaid After the Elections

The 2014 midterms have been called the “Seinfeld election” and the “meh midterms” — because they’re supposedly about nothing and nobody cares. But while congressional races have failed to capture voters’ imaginations, the campaigns for governor may have a major effect on at least one group of Americans.

Depending on who wins next Tuesday, hundreds of thousands of low-income Americans could get access to health insurance under the Medicaid expansion in the Affordable Care Act.

When the Supreme Court made the Medicaid expansion optional in 2012, many Republican governors and legislators opted out. Today, 27 states and D.C. have accepted the federal money, including a handful led by Republicans, but 21 states are not currently making an effort to do so.

That could change after next week’s elections. There are more than a dozen gubernatorial races considered toss-ups going into the final days of the campaign, and in at least half a switch from Republican control of the governor’s mansion could give new life to the debate over taking the Medicaid money.

In Florida, Alaska, Maine, Wisconsin, Kansas and Georgia—all of which have previously rejected an expansion of Medicaid—Republican incumbents are facing Democratic (and in Alaska’s case, Independent) challengers whose prospects look promising just five days out from Election Day.

In each of those six states, the challengers have openly mulled passing an expansion of Medicaid if they were to win. And the move would generally be popular with voters. According to a recent poll by the Morning Consult, more than 6 in 10 voters—and 62% of all voters in states that have not expanded Medicaid—think that all states should expand coverage to low-income people who are currently ineligible.

“The problem is that there are states where it’s not just a question of what the governor wants,” says Stan Dorn, a senior fellow at the Urban Institute. “Even if the governor’s office changes hands in Georgia the legislature has to agree.”

Apart from the turnover due to elections, governors in a number of states, including Utah and Tennessee, are considering expanding Medicaid over the next year as well.

Here’s a look at the six states where the issue is in question next week.

The background: Republican Gov. Rick Scott initially opposed the Affordable Care Act flat out, but he later changed his tune slightly and came out in support of the Medicaid expansion “if it did not cost Florida taxpayers.” The state legislature, however, remains staunchly against it.

What could happen: Democrat Charlie Crist has said he’ll go over lawmakers’ heads and approve it with an executive order.

Where does the race stand: A recent Quinnipiac University poll has Crist leading Scott by 3 points.

How many people would be eligible: An estimated 800,000 to 1 million Floridians would gain coverage.

The background: Republican Gov. Sean Parnell opted against expanding Medicaid in his state in 2013 and he remains opposed to it today.

What could happen: Independent candidate Bill Walker said in a recent interview with KTUU, “why would we not when it helps up to 40,000 Alaskans, creates up to 4,000 new jobs in Alaska, brings down overall health care. I just can’t say no.”

Where does the race stand: Walker has a slight lead over Parnell, according to Real Clear Politics.

How many people would be eligible: An estimated 43,000 Alaskans.

What could happen: Because the legislature remains on board with the idea, it’s likely that Maine would accept the federal money if Michaud wins.

Where does the race stand: LePage is up by nearly 2 percentage points, according to a Real Clear Politics analysis of recent polls.

How many people would be eligible: An estimated 70,000 Maine residents.

The background: Republican Gov. Scott Walker also turned down the Medicaid expansion, opting instead to push more low-income residents into the insurance marketplaces.

What could happen: Democrat Mary Burke has made a forceful push for the state to expand.

Where does the race stand: The final Marquette University Law School poll has Walker leading Burke among both registered and likely voters.

What could happen: Even if Democrat Paul Davis were to unseat Brownback, though, he’d still have to persuade the Republican-controlled legislature to change its mind.

Where does the race stand: A Real Clear Politics average of polls has Davis ahead by one percentage point.

How many people would be eligible: About 170,000 people, according to the Center on Budget Policies and Priorities.

The background: Republican Gov. Nathan Deal also rejected the expansion and signed a law making it harder for his successor to accept it.

What could happen: Even if Democratic challenger Jason Carter were to win, he’d have to win over a Republican-controlled legislature.

Where does the race stand: Deal currently leads Carter by over 2 percentage points, according to an average of polls. 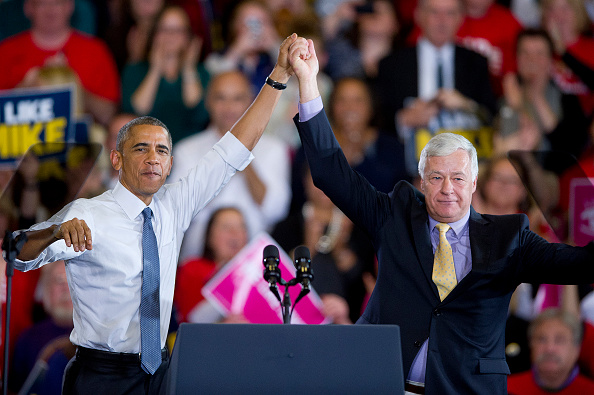 Obama Campaigns in Maine, Away From the Spotlight
Next Up: Editor's Pick