These Hail Mary Ads Show What Desperate Candidates Will Try

There’s a certain type of campaign ad that candidates hope they’ll never have to run. It typically airs in the final days before the elections, when the polls aren’t looking good and they decide to try for a Hail Mary pass to shake things up.

With the midterm elections just days away, these ads are surfacing now. Here’s a look at four long balls thrown by despairing candidates.

As the Texas gubernatorial race has slipped through her fingers, Democrat Wendy Davis reached for a new attack against Republican Greg Abbott. In a move that caused voters and pundits alike to shake their heads, she decided to criticize Abbott — who has used a wheelchair since a 1984 accident left him paralyzed — for not supporting the disabled.

Tom Corbett, the Republican governor of Pennsylvania, has long been the most likely incumbent to go down to defeat on Tuesday. So with the sense of a man with nothing to lose, he released an ad attacking Democrat Tom Wolf for supporting a hike in the income tax. That’s a pretty standard hit, but the visuals — chainsaws, demonic twins and evil clowns — are anything but routine.

In Virginia, Republican Ed Gillespie may have taken the Hail Mary metaphor literally. In a recent ad, he linked Democratic Senator Mark Warner to a recent push to force the Washington Redskins football team to change its name. The real chutzpah of the ad, though, comes when Gillespie argues that the fight, which Warner has mostly sat out, is a distraction from the real issues.

Not every Hail Mary ad is thrown by a candidate. In the Colorado Senate race between Democratic Senator Mark Udall and Republican Cory Gardner, NARAL Pro-Choice America tried a last-minute turnaround by arguing that a Gardner win would lead to the outlawing of birth control and a run on condoms.

And then there’s whatever the opposite of a Hail Mary pass is. (A screen pass?) Republican Senator Mitch McConnell is clearly feeling like he’s going to defeat Democrat Alison Lundergan Grimes on Tuesday or he wouldn’t have spent valuable ad money and time on a goofy ad where he giggles and plays with puppies. 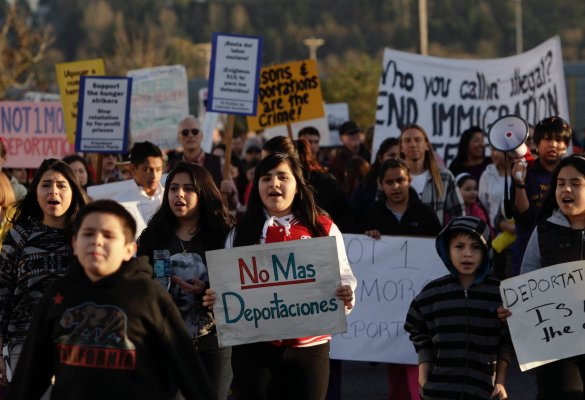 No Good Options for GOP on Obama's Immigration Move
Next Up: Editor's Pick