Everything You Need to Know About Apple's OS X Yosemite

On the screen and behind the scenes, Apple’s new desktop operating system, OS X Yosemite, is packed with new features large and small. From a graphical overhaul that even changes the Mac’s longstanding fonts to reconfigured apps that sling data back and forth from your computer to your iDevice, it’s a big leap for Apple.

Here’s what you need to know before you download Yosemite:

Who Can Use It:

This rule isn’t confirmed by Apple, but if your Mac’s body is made of aluminum, it can probably run Yosemite. That includes iMacs dating to mid-2007, MacBooks from late 20008, Macbook Pros going back to mid-2007, all the Macbook Airs, Mac Minis from early 2009, and Mac Pros since 2008.

In a word, lots. On the surface, a redesigned interface that stretches all the way down to the toolbars serves as window dressing for great new capabilities and some under-the-hood improvements. Some of these visual enhancements, like a dark menu bar, are simple but have been in demand by users for years. Meanwhile, other graphical add-ons, like the “Today” panel in the Notification Center, which displays dynamic information pertinent to the user, are real productivity boosting time-savers.

But Yosemite’s biggest and most innovative new feature is called Continuity, a technology that allows your Mac to connect with your iPhone and/or iPad to do some very useful things. For example, you can answer phone calls (streamed from your smartphone) on your computer, you can quickly connect to your Mac to your mobile device to use it as an Internet hotspot, and you can start work on one device (say, writing an email on your iPad) and pick up where you left off on another. Its a fluid technology that makes workflows actually flow.

There’s also an abundance of enhancements to the Mac’s default apps. For instance, Safari has undergone a huge overhaul, with security enhancements like stronger cookie blocking and integration of the non-tracking DuckDuckGo search engine, along with improved video performance that makes Macs more energy efficient Netflix machines. Continuity integration makes it possible to receive SMS messages in iMessage and to make a phone call on your iPhone (or from the FaceTime app) simply by clicking on an icon in the computer’s Contacts app. It’s improvements like these make Yosemite a bold first step towards unifying Macs and iDevices into one seamless supercomputer.

Why You Should Install It:

While these latest features provide plenty of reasons to run the newest Mac operating system, the simplest Yosemite justification is that the download is new and free. But beyond having the latest and greatest capabilities for a song, it’s almost always advisable to update any software as soon as upgrades are available, because newer versions patch security holes while older versions are vulnerable to being hacked.

Of course, it’s entirely possible that after upgrading her Mac, your cousin’s best friend’s daughter wasn’t able to log into her email anymore — but issues like these are generally few and far between. If you want to hear more horror stories, search the web for “OS X Yosemite problems,” just keep in mind that people typically don’t post comments online when things work great (which is most of the time).

And along those lines, this operating system is better than most first builds that Apple has released previously. That’s because prior to launch, OS X Yosemite had a widely-released public beta (a user-friendly practice that Apple only began doing recently), which helped make the software stable and functional. However, there is one caveat: if your computer is one of the older compatible Macs, it might be wise to decline the install — especially if you’re planning to upgrade your hardware soon, anyway. Then you’ll be upgraded by default, because all new Macs ship with Yosemite already installed.

How to Get It:

For the rest of us, Yosemite is available for download on the Mac App Store, for free. Depending on the speed of your Internet connection, the 5.16 gigabyte file could take a while to copy to your computer, so make sure you have the time and storage space necessary to run the updater. Apple requires that your computer have at least eight gigabytes of storage and two gigabytes of memory available, as well as Mac OS 10.6.8 or a newer operating system already installed. And as with any operating system install, we recommend you back up all your files in advance. It’s not just a good practice for now, but in case something happens next week, month, or year. 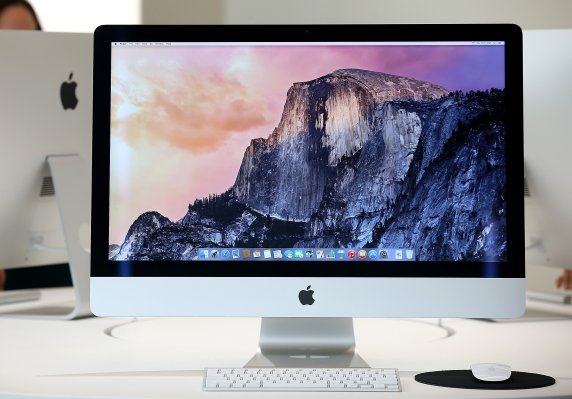 How to Get OS X Yosemite's Best Feature to Actually Work
Next Up: Editor's Pick