The Ebola outbreak in West Africa has morphed into one of our biggest health crises in years, with at least 4,900 known deaths among more than 13,000 cases and experts warning the worst could be yet to come.

Despite a growing international effort to combat the virus, outside health experts say the United Nations’ World Health Organization (WHO)—the only worldwide health institution—has been slow to react. They stress that there’s plenty of blame to go around, including with the U.S. and other regional governments, who were tragically sluggish in responding to Ebola. Still, critics complain that WHO has failed to lead the global fight—exactly the kind of crisis it has aimed to efficiently handle or prevent since its founding in 1948. In general, many say it’s “too politicized, too bureaucratic… too overstretched and too slow to adapt to change,” according to a report by the London think tank Chatham House, citing health experts and some former WHO staffers.

Armchair critics have it too easy, says WHO Director-General Margaret Chan, or “DG,” as she’s known in the graceful Geneva headquarters. WHO, she says, is only as good as the world’s 194 governments—their members, whose contributions pay their salaries and set direction—allow them to be. Governments haven’t raised their WHO dues in decades. The global financial crisis has pummeled the organization, stripping it of $1 billion in funds and about 1,000 bright minds. If the world wants a strong WHO, its staffers say, it needs to plow more money in and help it transform—and hopefully stop the next outbreak from whipping half way across the globe in just seven months.

On Oct. 28, WHO invited TIME to spend the day inside its Geneva headquarters, watching officials grapple with the Ebola epidemic and sitting in on a two-hour, top-level crisis meeting. In a wide-ranging interview with TIME’s Vivienne Walt, in her Geneva office, Chan, a 67-year-old Hong Konger, explains how she and her staff have struggled with the outbreak:

TIME: When was the moment when you thought to yourself, “Holy cow, this Ebola outbreak is big?”

Margaret Chan: I heard about it moving up at the end of June, when the analysis [inside WHO headquarters] was presented. I was very concerned. I asked my scientists to give me an assessment. After that we scaled up unprecedentedly. We have managed many outbreaks in the past but this has got to be the biggest. If you are going to war with Ebola, you need soldiers, weapons, and you need a war chest. WHO is well geared and has the capacity to do outbreaks on a smaller scale. We have been doing this for many, many years, protecting the world from pandemics. But this, the complexity and the scale of things, outstripped the capacity of WHO.

TIME: You say it was the end of June when you thought, oh my God. But people I’ve interviewed in the U.S. and elsewhere tell me that for months they were raising the alarm, from back in March, and that somehow the sense of urgency was not felt here at WHO in Geneva. Is that a fair criticism?

Chan: Well, with the benefit of hindsight, in retrospect…. We are doing a retrospective study on a regular basis, with all this information of colleagues around the world. And they realize, actually, cases of Ebola were spreading in a hidden manner. And now, looking back, all of us would say, yes, the scale of the response did not match the scale of the outbreak. And that is fair. And of course all of us underestimated the complexity.

When you look at this outbreak, thousands of people in Africa died and it didn’t get the attention it deserved until recently. People were saying, quite rightly, it takes a few cases outside of Africa to get attention. This was a perfect storm in the making. In the past, Ebola outbreaks happened in the bush in small villages. Twenty, 30, 40 years ago, there were less people in these countries, and less movement of people. It happened in three countries which came out of long-term conflict. Health systems were destroyed. And in terms of doctors and nurses, they have one or two per 100,000.

TIME: Yes, that’s certainly true. But others say you in Geneva did not get the information from the field when the outbreak occurred, that the details did not reach you. One person we’ve interviewed describe some WHO regional offices are “awful.”

Chan: I’ve promised to do a review and get all the documentation… and will identify what mistakes were made, and correct them. That’s my commitment. But now the most important thing for me is to bring the whole team together, to bring the total assets of the organization together to fight Ebola. There will be plenty of time for history, and we really need to do it in a transparent and accountable manner. But it is important that we move on and get the job done first and foremost.

TIME: You’re dealing with this unprecedented outbreak. Do you think it is going to change the way WHO works?

Chan: This has to be the turning point. It’s not only Ebola. You have to look at what other crises we are dealing with. We have crises in Central African Republic, Iraq, Syria, South Sudan. My staff are truly, truly at [a] breaking point. Members [governments] need to look at what kind of WHO is appropriate for the 21st century. With climate change, which is the defining issue for the 21st century, and a highly interconnected world, we should expect to see more crises of different sizes, magnitude and geographic location.

When a crisis gets to a certain level the D.G. [Director General] has [to have] the ability to deploy the entire assets of the organization. At this point, I need to consult, ask, urge. We don’t have the money. When I talk to member states, I tell them, the system does not provide the flexibility and the agility for the Director General to manage the organization. I said to them, if you want a credible, strong WHO, we need a WHO reform.

TIME: Do you think pre-recession WHO might have been able to handle the Ebola crisis better? Or with all the money in the world, are you up against something too complex, too difficult?

Chan: This is too big and it’s happening in countries with a lot of factors that amplify it. There are lessons the world’s countries need to learn, like the reliance on old experience to deal with Ebola in a new context. What worked 20, 30, 40 years ago will not work. Another lesson: I was not able and also MSF [Doctors Without Borders] we were not able to mobilize people. For the typhoon in the Philippines [in 2013] 150 medical teams came to help. For the Haiti earthquake, more than 125,000 aid workers came. With Ebola, the fear factor, the lack of formal medevac, lack of quality health care…. Outbreaks are human-resource intensive. To manage an Ebola treatment center of 80 beds you need 200 health workers. And I need foreign medical teams to manage them. The U.S. and U.K. governments are building state-of-the-art treatment centers to take care of health care workers in Liberia and Sierra Leone. So there are some good signs and things that are coming.

Chan: If people think WHO alone can prevent this crisis I think people are trivializing the reality on the ground. In the initial phase, we sent experts right away. We sent commodities, we sent equipment, we supported governments.… But, as I said, the transmission of the disease was spreading hidden through the movement of people.

I’ve been asking myself: how much time can I spend on Ebola given that it is going to be a sustained, severe outbreak? I [spend] about 70% of my time on Ebola. Would my member states accept I’m a one-issue D.G. There are more people dying of non-communicable diseases: Cancers, heart diseases, lung diseases, diabetes. There are millions suffering from mental health conditions. There are many people dying too early in road crashes. Can I drop everything? I don’t think so. I work at least 18 hours a day, even on weekends. And I’ve also learned great humility is important—to make sure we are not taken by surprise by an unforgiving virus.

TIME: It seems to me that WHO and certainly you have been talking about reforming WHO for years, and you have been running up against walls. So, is Ebola a crisis of such magnitude that this will shake the world into rethinking all this, allowing reform to happen?

Chan: This Ebola outbreak should really make them [governments] look very hard, really hard, at if outbreak control is so important, why didn’t they [WHO] have resources to do the job? The problem is that with prevention when you do a good job people say, okay that’s alright, now we need to move the money some place else.

Ebola for 40 years was an African disease. The world this time has learned a lesson: The world is ill-prepared for severe, sustained public health emergencies. That’s why I hope this is a turning point, a watershed event for people to understand that. If you want global health security, you need to invest.

In the next 2.5 years [Chan retires in 2017], I’m going correct all the mistakes before I leave this organization. I have the responsibility to the governments, but governments also have to look at how they can support WHO to do what they want it to do.

With the reforms [streamlined staff, reworked programs] I would never have been able to pull it off without the financial crisis. I’m very good at this. You know why? There are two sides to the Chinese character for crisis: One side crisis, one side opportunity. Deeper reforms will come from the Ebola crisis. I’m not going to waste this crisis.

For more, read TIME‘s feature on how the World Health Organization has come under fire for its failure to stop Ebola 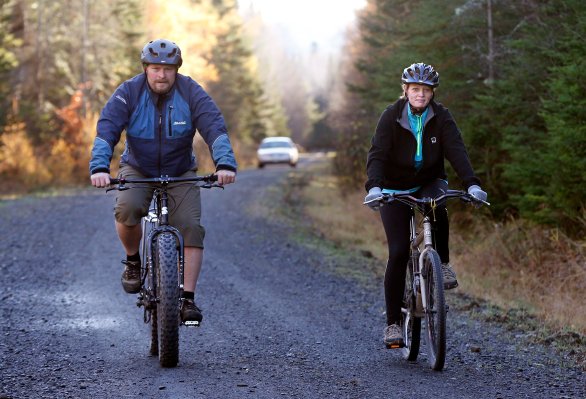 Ebola Nurse Takes a Bike Ride
Next Up: Editor's Pick