The San Francisco Giants celebrate after defeating the Kansas City Royals to win the World Series at Kauffman Stadium in Kansas City on Oct. 29, 2014
Jamie Squire—Getty Images
By Sean Gregory

Three World Series titles in five years? Yes, let’s give the San Francisco Giants their due. The Giants somewhat quietly won the 2010 and 2012 Fall Classics, beating the Texas Rangers in five games the first time, then sweeping the Detroit Tigers two years ago. But now that they’ve beaten the Kansas City Royals in a compelling Series that went the distance — the Giants nipped the Royals 3-2 in a nail-biting Game 7 — it’s time we revere the Giants, like we revere the late-90s New York Yankees, or even all those Atlanta Braves teams that won year after year, even though they only won a single World Series. Send Giants manager Bruce Bochy to the Hall of Fame.

Going into the 2014 World Series, many analysts dubbed the San Francisco-Kansas City matchup the “small-ball” series. And although there were some decidedly big-ball scores, like Kansas City putting up 10 runs in Game 6, and San Francisco scoring 11 in a Game 4 win, Game 7 fit the script. The Giants executed small-ball to perfection: they scored two runs on two sacrifice flies in the second inning. In the fourth, with the score tied at 2-2, big Pablo Sandoval advanced to third on a flyout to left field — left field! Pablo Sandoval! — and then scored the deciding run on a Michael Morse single.

And oh, how the Giants pitched. Well, starter Tim Hudson only lasted 1 2/3 innings, but Jeremy Affeldt, normally a late-inning guy, stopped any bleeding. Then came Madison Bumgarner in the fifth. No pitcher in history had a World Series like Bumgarner. He gave up one run in Game 1. He pitched a shutout on Sunday night. And here, on two days rest, Bumgarner had five more shutout innings in him. This, in an era of specialization, when pitchers just aren’t supposed to stretch their arms like Bumgarner did. Nuts, really. Crazy.

Bumgarner got some help in his first inning. Omar Infante hit a single to right, and Royals manager Ned Yost had the next batter, Alcides Escobar, sacrifice bunt on a 2-0 count. Bumgarner looked so shaky, but the charity out seemed to settle him down. Yosted.

And oh, how the Giants fielded. After Escobar’s bunt, Norichika Aoki sliced a line drive down the left field line. It smelled like a double. But Juan Perez was positioned perfectly, and he made a beautiful running catch. And two innings earlier, with a man on first and no outs, Giants second baseman Joe Panik dove to catch a grounder, flipped it to shortstop Brandon Crawford with his glove, and Crawford threw it on to first. The ump said Eric Hosmer was safe, but then after a replay review that should not have lasted as long as it did, Hosmer was ruled out. An unforgettable double play.

But it’s Bumgarner who we’ll always remember from this World Series. After Bumgarner retired 14 straight Royals, Alex Gordon hit a fly ball to center with two out in the bottom of the ninth: it tricked by San Francisco’s Gregor Blanco, who misjudged it. Perez chased it down at the wall, then bobbled it. Was Gordon going to tie up Game 7 on a ninth-inning, two-out inside-the-park home run? No, but he got all the way to third.

Read next: The 7 Greatest Trick Plays in Sports Movie History 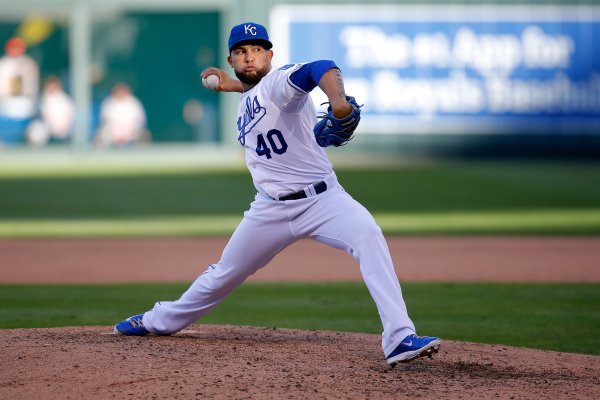 World Series Game 7 Will be a Bullpen Battle
Next Up: Editor's Pick