The story of Sherlock Holmes has been adapted countless times, but he’s has never had a sidekick quite like Dr. Joan Watson, played by Lucy Liu, on CBS’s Elementary. When the show returns on Oct. 30 for its third season, relations between the detective (Johnny Lee Miller) and his sober coach-turned-apprentice Watson are a little strained since she moved out of the house and he took off and joined MI6.

TIME caught up with Liu to talk about what’s in store this season — as well as her famous Destiny’s Child shout-out.

TIME: You’re in the middle of shooting the third season. What’s the most interesting thing that’s happened on set so far?
Lucy Liu: We had someone posing as a dead person we find in a dumpster. She’s got all the prosthetics on her face to make her look dehydrated, like she’s been there for a while. She’d been in makeup for three hours, but she’s in there eating a breakfast burrito!

That sounds like a great job — playing dead and sometimes eating burritos.
It’s probably not the most fun thing. We’ll have you lying in the baking sun on the beach, buried in the sand. Or you’re in a dumpster, and you have to eat your breakfast in there because you’re so hungry. We actually started using stunt people because it’s more intense than most people would have liked.

There are a lot of murders on this show. Are you surprised by what you can get away with on TV?
Absolutely! I always think, how is an 11-year-old going to watch this? I’m shocked when people say, “My daughter loves your show, she’s 11!” I’m like “Oh my God, she’s really young!”

Last season, Watson moved out of Sherlock’s house after their partnership got rocky. Any awkward roommate stories?
I lived with my brother when I first came to New York. It was a studio apartment. It was a bunk bed — he and his friend lived there and I slept on the floor.

Yikes. That sounds less than ideal.
I’ve known in advance it’s better for me to live on my own, even if it’s going to cost me more or I have to live in a smaller place!

Last season you made your directorial debut for the show. Are you doing that again this year?
Yeah, I’m going to be directing an episode coming up in December that’s going to be really fun. Last year it was exciting to try something out on a larger scale. I did a short movie three years ago in India, so this time was, obviously, in English and in a very different environment with an incredible crew that I got to work with on a much bigger budget. They asked me to come back, so I guess I did something right.

I think if you can make a movie in India, you can do anything.
I don’t disagree with that. It was in Mumbai with no budget. We shot it in five days. This eight-day schedule is a luxury.

Do you rule the set with an iron fist?
I’m actually very gentle on set! I’m very clear, I’m very organized, I have a shot list, I know exactly how I want things to go and how many takes I really need, ultimately.

How does it feel to be the boss?
Being the boss is pretty amazing, but it feels good to have an incredible team behind you — that’s what makes a great boss.

You’ve worked in both movies and television — is Dr. Joan Watson a character you can’t find in film roles?
In television there’s a little more accessibility, and the ability to have somebody of color in that role is incredibly helpful. On television, it’s just a little more relatable to have that kind of casting. I think in television people aren’t used to seeing that as much. You see that in theater quite a bit, colorblind casting. But in television they choose to stay black or white, and television has always been very groundbreaking, so it just made sense.

It seems like Asian-American representation on TV is changing a lot right now. John Cho has said starring as romantic lead in Selfie is “revolutionary,” and Fresh off the Boat, the first Asian-American family sitcom in two decades, is coming next year. Is it changing?
I think it’s progressing, and progress doesn’t happen overnight. When the Wall came down, it’s not like everything happened in a perfect manner. It’s just going to take time for things to set in. At the same time, it takes one person to really create that change and to be the person to upset that foundation for everyone else to follow. That’s somebody who’s got to be incredibly brave. I think [CBS CEO] Les Moonves has done a really great job with that. He’s always had multiple races in casting his shows, and I think if you look at his network across the board, he really stands for that. It’s not like he makes a statement about it, he just does it, and that to me is a much stronger statement in life — to just do something and not try and announce what you’ve done and what you haven’t done.

A very serious question before I let you go: Beyoncé once gave you a shout-out in the Destiny’s Child’s “Independent Women, Pt. 1.” Do you listen to that song a lot?
I think it’s wonderful. I don’t listen to it very often, unless it’s on for some reason in some store. It was on then, like ,14 years ago? But it comes on every now and then, and it’s still a great song. It’s still current.

Was it ever your ring tone?
No! That would be embarrassing.

If I had audio of Beyoncé saying my name…
You would just want it on all the time?

I would never stop playing it.
I don’t think I’m as consumed with myself in that manner, so no! 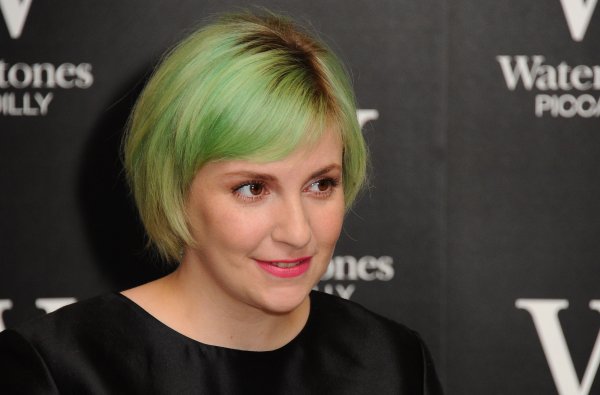 Lena Dunham Is Posting Pictures of Celebrities in Her Planned Parenthood Shirt
Next Up: Editor's Pick