No Good Options for GOP on Obama's Immigration Move

With reform stalled in Congress, activists are urging Obama to act on his own.
Jason Redmond—REUTERS
By Alex Rogers

When President Obama signs an executive order giving temporary deportation relief and work authorization for millions of undocumented immigrants, Republicans across the country and on Capitol Hill will blow up. But there’s not much they can do about it that will make a difference.

All Republican options have fatal flaws. Pass a bill to overrule the executive action? Obama will veto it. Try to override the veto? Not enough votes in the Senate, even if Republicans control it. Attach a rider to a government funding bill? End up with another unpopular government shutdown. Sue the president? Spend lots of taxpayer money and wait months if not years only to get rejected by a judge.

Still, the last option on the list may be the one Republicans go with.

While they are keeping their options open before the President shows his hand—as my colleague Alex Altman reports, it’s still unclear how big he will go—some have coalesced in favor of a lawsuit as the bare minimum response to what they think will be a monumental case in executive overreach.

This week, House Judiciary Committee Chairman Bob Goodlatte said on Fox that his recommendation to the Republican congressional leadership is to “immediately bring suit and seek an injunction restraining the president,” adding that he and his staff have been in “considerable communication” with House Speaker John Boehner and Majority Leader Kevin McCarthy about how to respond to the President’s actions.

Other Republicans have advocated for a lawsuit, including Reince Priebus, the chairman of the Republican National Committee, and Tennessee Republican Rep. Marsha Blackburn, who would “absolutely” support litigation to prevent the President’s executive action, according to spokesman Mike Reynard. Sen. Jeff Sessions (R-Ala.) and Rep. Mo Brooks (R-Ala.) have supported it in the past. And on Wednesday, House Homeland Security Committee Chairman Michael McCaul implied that he would too.

“Our Constitution requires the President to work with Congress to enact laws, not ignore Congress or the will of the people,” said McCaul in an emailed statement. “If the President decides to once again go it alone and grant amnesty through executive order by the end of the year, my colleagues and I will have no choice but to do everything in our power to stop him.”

Over the summer, the House passed a Blackburn-sponsored bill designed to freeze the Deferred Action for Childhood Arrivals program—limiting the number of children granted deferred deportation and work permits—and bar the President from taking future executive actions to expand efforts to postpone deportations. But the bill went nowhere in the Democratic-majority Senate and even under a Republican Senate it would face an Obama veto.

A senior House Republican aide familiar with the issue says that expanding the litigation the House authorized in July over the Affordable Care Act is “certainly one option,” although no decisions have been made by the party conference. All that would need to happen to sue the president over his executive order is for the House to take another vote. (One reason, perhaps, why the previous suit has not yet been filed—first pointed out by Washington Monthly—is that the nonpartisan Congressional Research Service agreed with legal experts in that the claim had no legal merit.) “We’ll continue to consult with our members and make a decision if and when the president acts,” says the aide.

The Republicans’ response could very well depend on what the President does, “if and when” that occurs. Expanding DACA to include some family members of those already eligible could provoke a different reaction than smaller measures, such as expanding work permits for those in the agricultural or high-skilled tech sector, which business groups have pushed. Immigration advocates counter that Obama might as well go big—affecting the lives of several million undocumented immigrants instead of around a million—because the GOP response is going to hold the same shrieking tenor no matter what.

A lawsuit may have little merit besides making some noise. Last month, the National Immigration Law Center and the American Immigration Council distributed a letter sent to the White House signed by 136 immigration law experts claiming that the President has the authority to use prosecutorial discretion in preventing large numbers of undocumented immigrants from being deported. In July, one of those experts, Stephen Yale-Loehr of Cornell University Law School, told TIME that the President has “wide discretion when it comes to immigration,” adding that expanding DACA falls “within the president’s inherent immigration authority.” In a one-word statement, distinguished Harvard constitutional law professor Laurence H. Tribe told TIME that the GOP claim was “unlikely” to have standing.

Of course, the legal merit of the lawsuit may not be all that important—simply announcing one could keep GOP Congressmen content with a ready response to constituent and reporter questioning in the immediate term. If and when the conservative backlash dies down, the party will be fully focused on 2016, when the GOP can undo Obama’s legacy by repainting the Oval Office red. 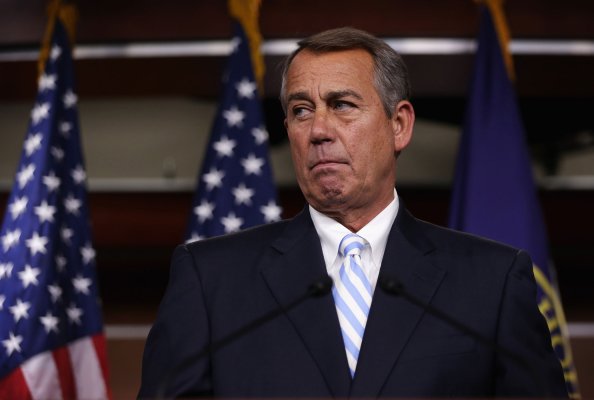 John Boehner's Job Is About to Get Harder
Next Up: Editor's Pick