The Sad Story of Laika, the First Dog Launched Into Orbit

It was a Space Race victory that would have broken Sarah McLachlan’s heart. On this day, Nov. 3, in 1957, the Soviet Union launched the first-ever living animal into orbit: a dog named Laika. The flight was meant to test the safety of space travel for humans, but it was a guaranteed suicide mission for the dog, since technology hadn’t advanced as far as the return trip.

Laika was a stray, picked up from the Moscow streets just over a week before the rocket was set to launch. She was promoted to cosmonaut based partly on her size (small) and demeanor (calm), according to the Associated Press. All of the 36 dogs the Soviets sent into space — before Yuri Gagarin became the first human to orbit Earth — were strays, chosen for their scrappiness. (Other dogs had gone into space before Laika, but only for sub-orbital launches.) The mission was another in a series of coups for the Soviet Union, which was then leading the way in space exploration while the United States lagged. Just a month earlier, they had launched Sputnik, the world’s first satellite. When Laika’s vessel, Sputnik 2, shot into orbit, the U.S. fell even further behind.

News media alternated between mockery and pity for the dog sent into space. According to a 1957 TIME report on how the press was covering the event, “headlines yelped such barbaric new words as pupnik and pooch-nik, sputpup and woofnik,” before ultimately settling on “Muttnik.”

“The Chicago American noted: ‘The Russian sputpup isn’t the first dog in the sky. That honor belongs to the dog star. But we’re getting too Sirius,’” the piece adds.

Other headline-writers treated Laika with more compassion. According to another story in the same issue, the Brits were especially full of feeling for the dog — and outrage toward the Russians. “THE DOG WILL DIE, WE CAN’T SAVE IT, wailed London’s mass-minded Daily Mirror,” the story declares. The Soviet embassy in London was forced to switch from celebration mode to damage control.

“The Russians love dogs,” a Soviet official protested, per TIME. “This has been done not for the sake of cruelty but for the benefit of humanity.”

Nearly a half-century later, Russian officials found themselves handling PR fallout once again after it was revealed that reports of Laika’s humane death were greatly exaggerated.

Although they had long insisted that Laika expired painlessly after about a week in orbit, an official with Moscow’s Institute for Biological Problems leaked the true story in 2002: She died within hours of takeoff from panic and overheating, according to the BBC. Sputnik 2 continued to orbit the Earth for five months, then burned up when it reentered the atmosphere in April 1958.

One of Laika’s human counterparts in the Soviet space program recalled her as a good dog. He even brought her home to play with his children before she began her space odyssey.

“Laika was quiet and charming,” Dr. Vladimir Yazdovsky wrote in a book about Soviet space medicine, as quoted by the AP. “I wanted to do something nice for her: She had so little time left to live.”

Read TIME’s 1957 take on Laika’s launch, here in the archives: The She-Hound of Heaven 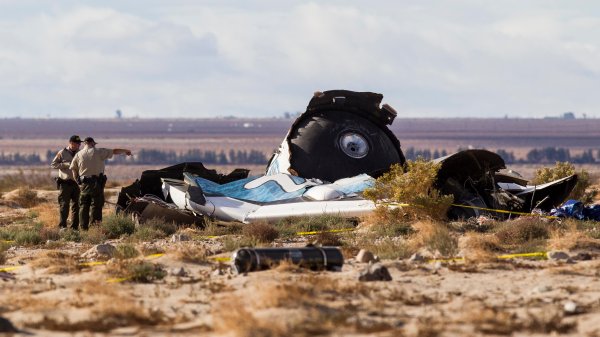 Virgin Probe Could Take a Year
Next Up: Editor's Pick