4 Foods That May Shorten Your Life

Everyone wants to know the secret to living longer. There’s no telling what exactly helps some people make it to 100, but healthy eating is one thing that sure does help.

Some foods, though, could actually hurt your chances of growing older by messing with components in your cells called telomeres. These little caps on the ends of your chromosomes are key for protecting DNA from damage—many experts compare them to the plastic tips on the end of shoelaces.

HEALTH.COM: 13 Everyday Habits That Are Aging You

Thing is, as your cells replicate, telomeres get shorter over time, according to the University of Utah Health Sciences. As telomeres shorten it can trigger cells to malfunction and die, and shorter telomeres have been linked to conditions like cancer and cardiovascular disease. Research has also shown lifestyle factors including diet can speed up (or slow down) the shortening process, which is sometimes thought of as an “aging clock.”

These four foods can contribute to telomere shortening, so it might be best to limit these eats for a long and healthy life.

Sugary soda is bad news for telomeres. A recent study of 5,309 adults in the American Journal of Public Health found that a daily 20-ounce serving of soda was associated with 4.6 more years of aging. To put that in perspective, it’s the same amount of aging researchers have linked to smoking. Drinking an 8-ounce soda daily had a smaller impact: it was linked to an additional 1.9 years of aging. While the researchers didn’t find a tie between telomeres and non-sugary diet soda, it might not be any better for you. Research shows that drinking diet soda daily is associated with a 67% greater risk of type 2 diabetes. And artificial sweeteners can increase sugar cravings, too.

HEALTH.COM: 10 Reasons to Give Up Diet Soda

Another no-no for telomeres is processed meat, like hot dogs and pepperoni. A 2008 study of 840 people in The American Journal of Clinical Nutrition looked at the effect multiple food groups had on telomere length. Researchers found that people who consumed one or more servings of processed meat each week had shorter telomeres than those who didn’t eat any processed meat.

Higher intake of red meat, like hamburgers and steak, has long been associated with heart disease and cancer, and that could be tied to its effect on telomeres. For a study in Clinical Nutrition, rats were fed varying diets of beef or chicken for four weeks. More red meat in the rats’ diet was linked to decreased telomere length in colon cells. Similar findings were shown for the white meat, though red meat had a greater effect. The good news: diets that included resistant starch, a good carb that helps you burn fat, weakened the effect red meat had on telomeres. More reason to fill up on foods rich in resistant starch, including bananas and lentils.

HEALTH.COM: 14 Ways to Age in Reverse

Like red meat, alcohol also gets a bad rap for its connection to chronic health conditions. A study presented at the 2010 American Association for Cancer Research Annual Meeting found alcohol can speed up telomere shortening, too. Researchers looked at the serum DNA of individuals who abused alcohol (22% had four or more drinks per day) and those with more moderate alcohol use. Telomeres were dramatically shorter in those who drank heavily. In fact, they were half as long as the telomeres of non-abusers (0.41 vs. 0.79 relative units), so it’s a good idea to be mindful of how much you drink.

HEALTH.COM: How Alcohol Affects Your Body 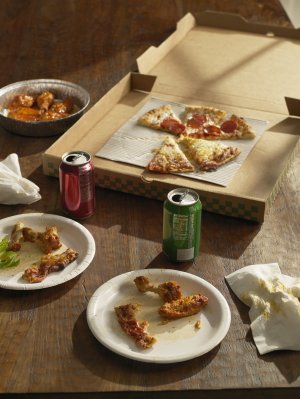 Why Kids Who Eat Junk Food Early Prefer It Later in Life
Next Up: Editor's Pick