One Month After Tear Gas, Hong Kong Protesters Ponder Their Next Step

Tuesday evening in front of Hong Kong’s Central Government Complex seemed at first glance like any other in recent memory, with pro-democracy protesters milling around the tent-filled section of highway they have christened Umbrella Square.

But it was on this day exactly one month ago that police used tear gas on thousands of citizens demanding the right to elect their own leader without interference from Beijing.

And this memory remains fresh in people’s minds.

“It was a sad day because of what the police did,” said 24-year-old Alan Yip, who was on the front lines on Sept. 28 and has been camping out in the ritzy Admiralty district for the past 20 days. “Many people suffered.”

Tuesday’s commemoration, attended by thousands, was filled with symbolism and perfectly orchestrated. At exactly 5:57 p.m., the time the first tear gas was deployed, protesters opened a sea of umbrellas and observed 87 seconds of silence for the 87 canisters fired. Many donned goggles and face masks as they had during the onslaught.

There was a huge cheer as the silence ended, and a long yellow banner was unfurled reading “I want real universal suffrage.” As music began to play and a screen off to the side showed scenes of that tumult, plus everything that has happened since, many protesters wept anew as they reflected on their ongoing struggle for democracy.

Oct. 21 talks between Hong Kong officials and student leaders yielded little progress, and on Tuesday the students asked for a meeting with China’s Premier Li Keqiang, according to Bloomberg.

For protesters like Dominic Lee, though, the immediate future looks somewhat bleak. “It’s a bit of getting nowhere,” he said. “You can see the government didn’t respond, they didn’t change anything.”

“We will eventually have to retreat because it can’t stay like this forever,” agrees Felix Yeung, a 27-year-old musician. “If something happens, it gives both sides a step to move forward. This movement is going nowhere if there is no further catalyst.”

On Sunday, a public vote to determine the next course of action for the movement was abruptly canceled, which protest leaders attributed to a lack of discussion and security fears.

Meanwhile, groups opposing the Occupy movement have stepped up efforts to rally people against the disruption to everyday life. A petition in support of the police and urging an immediate clearing of the roads gathered over 800,000 signatures in three days, according to organizers. Although some have questioned its validity, anti-Occupy leader Robert Chow stressed the apparent groundswell of supporters.

What Hong Kong's Poor Are Fighting for

“If we’re talking about democracy, then isn’t it true that democracy’s backbone is majority rule?” said Chow, a spokesperson for the Alliance for Peace and Democracy group, which initiated the petition. “Just because [the protesters] have an idea, they have no right whatsoever to hold Hong Kong hostage, to disrupt law and order and disregard the rule of law.”

Chow hopes the anti-Occupy petition, which will run until Sunday, will give the government and the police the “moral backing of the people to do something about restoring roads.”

The protesters, on their part, are not backing down yet. An informal survey conducted by Reuters revealed that 9 out of 10 are prepared to stay on the streets for more than a year.

“We can’t lose, because if we end this revolution now we will get nothing,” said Sam Shum, a 23-year-old student. “If we lose, we will lose our future.” 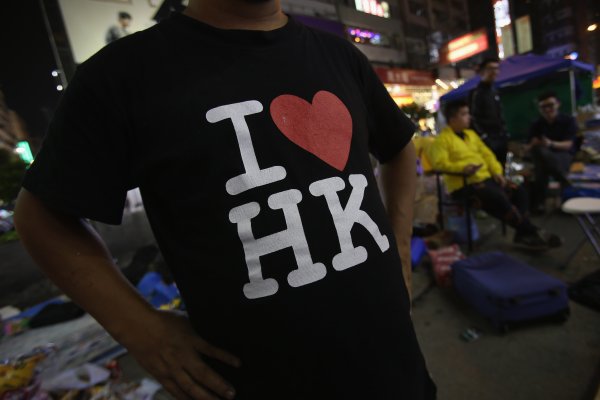