NASA's Antares Explosion: What it Means

The good news—the very, very good news—is that no one was aboard Orbital Sciences’ Antares booster when it exploded just six seconds after leaving the launch pad on Wallops Island, Va. at 6:30 PM EDT on Oct. 28. It was the fifth launch of the Antares and the fourth that was headed for the International Space Station (ISS) on a resupply mission. The booster made it barely 200 feet off the ground.

The bad news—the very, very bad news—is what this means for Orbital as a continued player in the competition to supply the ISS. It was in 2008 that Orbital (which has a long history in the space biz) and Elon Musk’s SpaceX (which had none at all) won a $3.5 billion NASA contract, with Orbital taking $1.9 billion of that for eight flights. Halfway through the contract, the company was looking to re-up, and this will not reflect well on them at the bargaining table.

Orbital was never a serious part of the even more furious competition to take over the manned portion of NASA’s low Earth orbit portfolio. The winners of that battle, named Sept. 16, were SpaceX again, and Boeing—a venerable part of the NASA family and prime contractor of the ISS. Tonight’s explosion would be a lot more worrisome if one of those two—already gearing up to carry people—had been responsible. But for Orbital, it will be bad enough.

Worse for the company is CEO David Thompson’s admission on Oct. 29 that part of the problem could be the AJ-26 engines used in the deceased booster’s first stage. Originally designed by the Soviet Union (that’s not a typo—we’re talking about Russia long before the fall of communism) the engines were later updated and retrofitted for the Antares booster.

It is too early to say if the AJ-26’s were indeed responsible for the explosion, but old hardware is old hardware and in an era in which the likes of Musk are starting with a blank page when they design their engines, taking outdated stuff off the shelf is not the way to inspire confidence. In 2012, a catty Musk made that point, telling Wired magazine:

Musk being Musk, that’s more than a little hyperbolic, but the snark still stung Orbital. It is an especially bad time for any aerospace company to have to be defending the use of Russian-made engines, ever since spring when U.S. sanctions against Russia over its invasion of Crimea led Deputy Prime Minister Dmitri Rogozin to mock America’s dependence on Russia’s Soyuz rockets to reach the International Space Station. “After analyzing the sanctions against our space industry,” Rogozin said, “I suggest to the USA to bring their astronauts to the International Space Station using a trampoline.”

More worrisome was Rogozin’s threat to limit sales to the U.S. the RD-180 engines that are used in America’s workhorse Atlas V rocket. That bit of bluster soured politicians on continuing to do space business with Russia at all and kick-started efforts to develop a domestic alternative to the RD-180. Now comes Orbital with an older, far worse Russian engine that just may have caused an entire rocket and its cargo to go up in flames.

A reputation-saving case the company could plausibly make—though it would be suicide to try—is the “stuff blows up” argument. Space travel is notoriously hard and rockets are notoriously ill-tempered. They are, after all, little more than massive canisters of exploding gasses and liquids, with the weight of the fuel often much greater than the weight of the rocket itself. This is not remotely the first time launch controllers have witnessed such a fiery spectacle on the pad and it won’t be the last. Realistically, there will never be a last.

But Orbital is supposed to be a senior member of the space community, not one of the freshmen like SpaceX or Richard Branson’s Virgin Galactic. No exploding rocket is good—especially when contracts are ending and NASA is again looking for free agents. It’s much worse for an outfit that’s been in the game for a while. Final determination of how bad the damage is will await the investigation into the cause of the explosion. But one thing’s certain: you wouldn’t want to be on the company’s Vienna, Va. campus tonight—on what is surely going to be the first of a lot of very long nights to come. 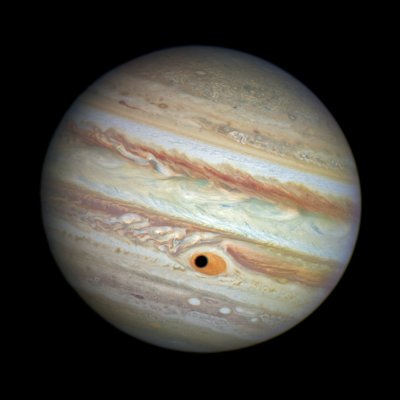 A New View of Jupiter Reveals 'Eye' of its Storm
Next Up: Editor's Pick