The label and imagery of “Rotten Apples” at the front of the magazine has driven much of the debate about the article. That is a shame, because it has overshadowed the substantive reality explored in the piece.

We know the vast majority of teachers are committed, caring and conscientious. They are not rotten; they are the core of our success stories in public schools.

The real issue is covered in the body of the story itself, and in the victorious Vergara case on which the Time piece is based: tenure, dismissal and seniority laws that work to keep grossly ineffective teachers in class. The most telling anecdote came from the superintendent whose singular request to improve his schools was not more public money or supplies but “control over my workforce.”

Why? Because states with flawed teacher laws are doing the unfathomable. They are working against their own stated mission of teaching all children well. In New York, the courts have found that access to at least a sound, basic education is guaranteed by the state constitution – and yet state laws actually undermine that.

That fact that it happens in a minority of cases still amounts to hundreds or thousands of children in a large district. And if it happens at all and we know about it, is that not a problem we should fix? Otherwise, what is the message sent to students who are taught by teachers who brazenly fail to lead or control their class, let alone inspire their students? Sorry kids, better luck next year?

Parents are turning to the courts as a last resort, as a matter of inspiration out of desperation. Years of legislative inaction and inertia inside school systems have offered no other choice. If elected leaders will not lead, parents are justified to question whether these laws causing such problems are even constitutional.

The Time article mentions the New York case supported by my organization, but unfortunately describes the litigation in shorthand, calling it my lawsuit. It is not. I use my platform as a former TV journalist to draw attention to the cause. But the case belongs to the families who serve as plaintiffs, and they do not do it casually. It is not easy to take on the state government and the teachers’ unions.

These parents are fighting because they want more good teachers in our schools. Turns out that, they, too, are trying to fix this. And they deserve our support.

Billy Easton, the Executive Director of the Alliance for Quality Education, responds here. 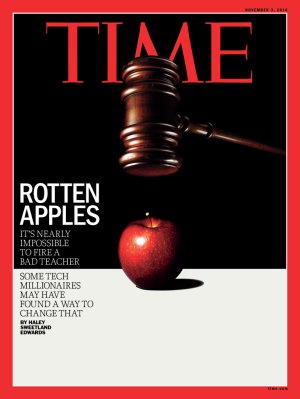 A New Jersey Parent Responds to TIME's Cover
Next Up: Editor's Pick