The main entrance to the Massachusetts Institute of Technology in Cambridge, Mass.
Rick Friedman—Corbis
By Eliza Gray

A new survey of student experiences with sexual assault at the Massachusetts Institute of Technology is an encouraging step for schools working to put an end to the shamefully widespread problem of campus rape.

That the prestigious school released the study publicly is helpful in erasing the stigma surrounding sexual assault. And the numbers show that even an institution far better known for Fields Medals than frat parties has an incidence of campus rape comparable to other colleges. Roughly 35% of MIT’s 11,000 graduates and undergraduates took the anonymous survey. Of the undergrads, about 17% of women and 5% of men reported experiencing sexual assault while at the Massachusetts school.

But a deeper look at the numbers points to a more troubling statistic. Even though 17% of female undergraduates reported an experience that fits the survey’s definition of sexual assault (“unwanted sexual behaviors … involving use of force, physical threat, or incapacitation”), only 11% of female undergraduates checked “yes” when asked directly if they had been “raped” or “sexually assaulted.” Despite a concerted effort by the Obama Administration, state officials and campus leaders, MIT students were uncertain about what qualified as sexual violence — even when reporting that they had experienced assault.

Sadly, that’s not exactly surprising. Experts say there are numerous reasons students struggle to understand the definition of sexual assault, including denial about the experience and and the hesitation to apply the label to attackers or those who experience it. “There is still such a stigma to be a ‘rape victim’ or a ‘rapist,'” says Jane Stapleton, a University of New Hampshire researcher and expert in sexual assault prevention.

Of students who said they had been assaulted, many blamed themselves, which may explain why so few of them decided to report the incident. Of the assault victims, 72% said they didn’t think it was “serious enough to officially report” and 44% said they “felt they were at least partly at fault or it wasn’t totally the other person’s fault.”

MIT Chancellor Cynthia Barnhart says part of the challenge in reducing assault is educating students about all the forms it takes. “We can’t prevent what is not agreed upon by everyone,” she says.

Barnhart says that MIT has had an increase in reported sexual misconduct since the survey was advertised last spring, a sign that awareness is growing.

Still, as Stapleton says, “it’s going to take time to change the culture.” 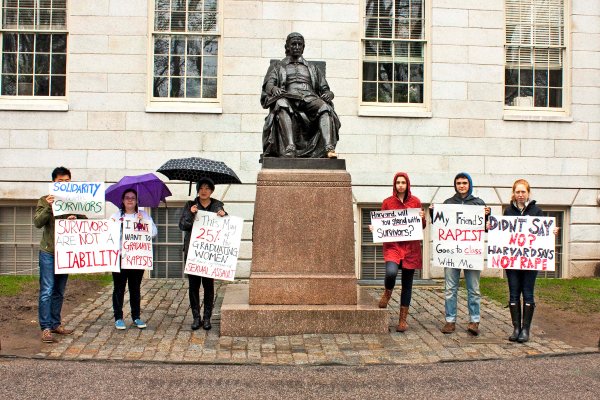 Harvard in Hot Water Over Sexual-Assault Policy
Next Up: Editor's Pick