Activists participate in a protest to seek justice for a Filipina transgender Jennifer Laude outside a justice hall where a preliminary investigation was held at the Philippine city of Olongapo, north of Manila, on Oct. 27, 2014
Lorgina Minguito—Reuters
By Per Liljas

The U.S. Marine accused of killing a transgender Filipina has asked prosecutors to reduce the murder charge to homicide if the case is brought to court, since there is no “probable cause for murder.”

Lawyers for Private First Class Joseph Scott Pemberton presented the motion at a preliminary hearing in the northern Philippine city of Olongapo on Monday, Rappler reports. Pemberton did not attend the hearing.

Jennifer Laude, 26, was found strangled and drowned on Oct. 11 in a motel bathroom where witnesses last placed her together with Pemberton. The case has become politically charged because of a defense agreement giving the U.S. military custody over the suspect.

Last week, Pemberton was transferred to a Philippine military base, and he is now detained at the Philippines’ military headquarters in Manila under joint custody.

According to Philippine broadcaster ABS-CBN, Pemberton’s lawyer Rowena Garcia Flores said he did not file an expected counter-affidavit because he had not yet had the “opportunity to examine the case.”

Laude’s killing has sparked widespread protests against the defense agreement between the U.S. and the Philippines, and has also led to calls for greater protection for LGBT people in the country.

On Monday, Laude’s German boyfriend, Marc Suselbeck, was charged with gross arrogance and serious disrespect to Filipino authorities after climbing the fence surrounding the camp where Pemberton was held, and shoving a military guard, the Philippine Star reports. 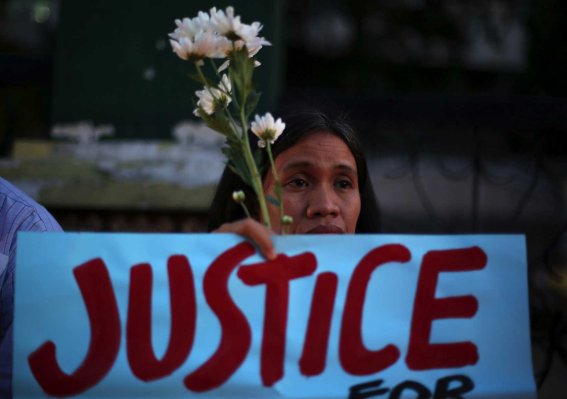