New York City Mayor Bill de Blasio, his wife Chirlane McCray, and New York City Health Commissioner Mary Bassett on Saturday afternoon dined at a West Village restaurant that briefly closed after it was revealed the city’s first Ebola patient, Dr. Craig Spencer, had himself enjoyed a meal there not long before being diagnosed with the disease.

“We are not only resilient, we are not only tough, we stand by each other,” said de Blasio in a press conference after his meal at The Meatball Shop, a well-known city eatery specializing in its eponymous dish.

In a notable revelation, when asked by reporters about New York Gov. Andrew Cuomo and New Jersey Gov. Chris Christie’s Friday decision to enforce a mandatory 21-day quarantine for all health workers returning from the three West African countries hardest hit by the Ebola outbreak, de Blasio confirmed that neither governor told him about the plan beforehand. On Saturday, Illinois announced it will put similar measures into place.

“In an atmosphere of crisis, we respect the chain of command,” de Blasio said. The mayor would not directly answer whether he supports the mandatory quarantine plan, nor would City Health Commissioner Bassett. The mayor did, however, say the quarantine directive was made with “inherent flexibility.” Bassett will be overseeing quarantines in New York City, though she told TIME she hasn’t seen anything in writing yet.

Both de Blasio and Bassett tried several items on The Meatball Shop’s menu, seeking to emphasize it was safe to eat there. The restaurant, however, didn’t need the mayoral stamp of approval. It was packed with the usual weekend brunch crowd, while owner Daniel Holzman told reporters that when he reopened the restaurant at 6 p.m. local time Friday there was a line down the block filled with restaurant supporters.

“It’s an example of how New Yorkers deal with a challenge,” said de Blasio of the packed house.

Dr. Spencer, the city’s sole Ebola patient, is currently being treated at Bellevue Hospital, while his fiancée and two of friends are still under quarantine. 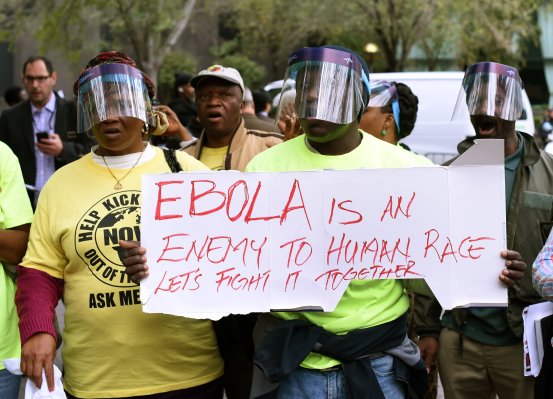