State workers for the Office of Management and Enterprise Services remove the damaged remains of a Ten Commandments monument from the Oklahoma State Capitol grounds on Oct. 24, 2014 in Oklahoma City.
Sean Murphy—AP
By Denver Nicks

Secret Service have arrested a man who allegedly slammed his car Thursday night into a controversial Ten Commandments monument near the state capital building in Oklahoma City. The statue is now smashed to pieces.

Officials said the suspect, whose name has not been released, ran his car into the monument at about 9:00 p.m. Thursday night, reportedly saying that Satan made him do it. Oklahoma City’s KOCO news station reported that the suspect also threatened to kill President Barack Obama and said he urinated on the monument before knocking it over.

The American Civil Liberties Union, which has sued to have the monument removed, condemned the desecration of the statue. No evidence suggests there is a connection between this incident and a Satanic group wishing to install a monument to Satan alongside the Ten Commandments.

The vehicle involved in the incident was left at the scene and has been impounded. 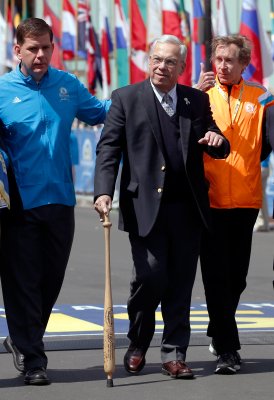