The U.S. Navy is sending one of the world’s best hearing aids to the southern Indian Ocean, ready to dispatch it to the depths in the hunt for the black boxes aboard missing Malaysia Airlines Flight 370.

The Navy’s Towed Pinger Locator 25 trawls for sounds like a fisherman trolls for fish, and kind of resembles a 30-inch, 70-pound, fishing lure. It’s towed behind a vessel traveling no faster than five knots, listening for pings from the flight-data and cockpit-voice recorders that experts believe have ended up on the sea floor. Recovering those boxes and analyzing the data they contain is the best way to learn what happened aboard the flight, which disappeared March 8 with 239 people en route from Kuala Lumpur to Beijing.

“The Towed Pinger Locator has some highly sensitive listening capability so that if the wreck site is located, we can hear the black box pinger down to a depth of about 20,000 feet,” said Commander Chris Budde, a U.S. 7th Fleet operations officer. “Basically, this super-sensitive hydrophone gets towed behind a commercial vessel very slowly and listens for black-box pings.”

The acoustic signal of any pings is transmitted via cable to the towing ship and funneled into an oscilloscope or a signal-processing computer. Once found, the ship would make repeated tracks above its general location to pinpoint where it is. 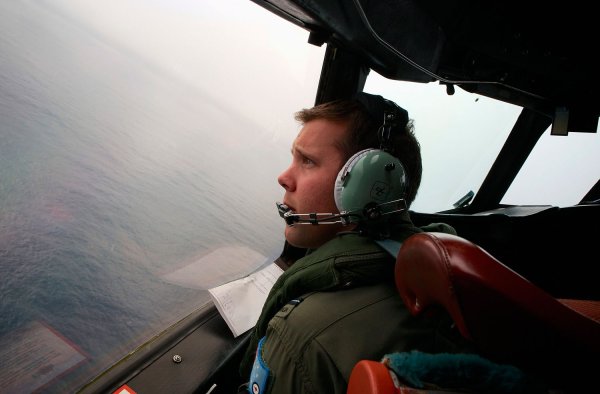