Seriously? This Is What Passes for Feminism in America

Ideas
By Karin Agness
Karin Agness is the Founder and President of the Network of enlightened Women.

On Tuesday, I listened to Malala Yousafzai speak at the Forbes Under 30 Summit on her work fighting for girls’ education. Malala was shot in the head on October 9, 2012, by the Taliban for her outspoken views. She survived. But many girls don’t.

She has become a public figure, fighting for education for girls. Appropriately, she learned that she won the Nobel Peace Prize this year while in class. Her courage and grace are inspiring.

Today, I returned home to the so-called “war on women” in America. The latest antic? Apparel company FCKH8 posted a video of young girls dressed as princesses using the F-word and gesturing with their middle fingers to try to bring attention to sexism. It’s uncomfortable to watch—not in the sense that it causes viewers to rethink long-held beliefs, but because it’s a cheap ploy. Toward the end, two adults appear hawking “This is what a feminist looks like” and “Girls just want to have fun-damental rights” t-shirts. The video ends with a young girl saying, “Swear jar? I don’t give a f**k.” This isn’t courageous or graceful.

This for-profit t-shirt company recognizes that young girls yelling the F-word gets attention. And sadly, that is what much of feminism has been reduced to today—nothing more than offensive, crude attempts to draw attention away from the real issues.

Take equal pay. In the video, the girls recite the tired and debunked statistic that women supposedly make only 77 cents for each dollar that men make. Using the number this way has been discredited by people across the political spectrum, including Hanna Rosin, writer and author of The End of Men.

The problem is that this FCKH8 effort isn’t an outlier in feminism in America today. Comedian Sarah Silverman starred in a video as a woman who decided to get a sex change operation because she would supposedly get paid more as a man. What? This was an effort to raise money for the National Women’s Law Center, which “has worked for 40 years to expand, protect, and promote opportunity and advancement for women and girls at every stage of their lives—from education to employment to retirement security, and everything in between.” Maybe this silly ad helped them raise money, but wouldn’t a serious attempt have been better for women?

The battles that women and girls like Malala are fighting each and every day make the so-called “war on women” in America appear laughable. In some parts of the world, women would give about anything to be able to go to school. And some give it all. These women probably can’t even imagine testifying before Congress to try to get their university to pay for birth control and then turning that fame into a political candidacy.

It’s no wonder that only 20% of Americans self-identify as feminists, according to a Huffington Post/YouGov poll.

The FCKH8 “F-Bombs for Feminism: Potty-Mouthed Princesses Use Bad Word for Good Cause” is the latest example of feminism gone wrong in America. Feminists should start using their words, including the F-word, more wisely, because what they say could benefit women around the world.

Karin Agness is the Founder and President of the Network of enlightened Women. 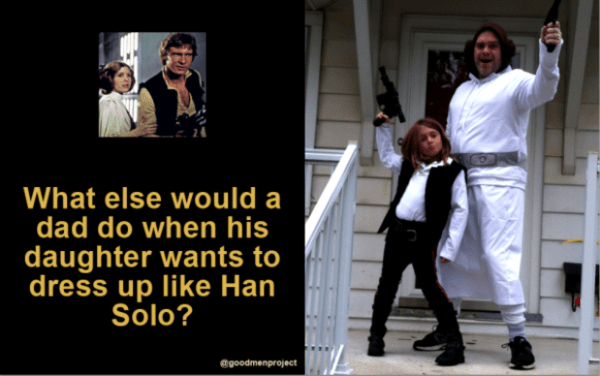 What’s a Dad to Do When His Daughter Wants to Dress as Han Solo?
Next Up: Editor's Pick