All Your Avengers: Age of Ultron Trailer Questions Answered

As you’re likely aware at this point (and if not, surprise!), the trailer for Avengers: Age of Ultron leaked late last night, so Marvel—after blaming those no-good troublemakers at Hydra—decided to release the official version nearly a week ahead of schedule.

If you’ve watched the trailer, it’s a good bet that you have at least a few questions. We’ll do our best to answer them below:

Who’s that guy talking to us in the voiceover?

That would be the titular Ultron (James Spader, recently of The Blacklist), one of Marvel’s chief supervillains and a prime nemesis of the Avengers in the comics.

Wait, so it’s not the Mandarin?

No. Even though Spader is using the same creepy/menacing inflection that Ben Kingsley employed for the Mandarin in Iron Man 3, these are two entirely separate and distinct characters.

Okay, so back to Ultron. What’s his deal?

It’s not entirely clear from the trailer what Ultron’s goals are, though if he believes that “everyone screaming for mercy” is “beautiful,” it’s a safe bet that he probably wants what all supervillains want: the superheroes dead, lots of innocent people dead and, of course, world domination (of sorts). He also appears to not be a big fan of strings.

And I gather he’s that sort of Iron Man-looking figure who confronts the Avengers about 30 seconds into the trailer?

You got it. The trailer doesn’t explain how Ultron came to be, but according to Entertainment Weekly, he’s “the ultimate drone”—a creation of Tony Stark (Robert Downey Jr.), designed to essentially police the world as an omnipotent force — that’s a different take from the books, where he’s created by Hank Pym, a character that hasn’t made it to the Marvel Movie Universe yet. Ultron isn’t so much a physical being as a consciousness that can transfer itself from one automated form to another. To make matters worse, when Stark created Ultron, he infused the A.I. with elements (the worst ones) of his own personality. Needless to say, things don’t quite go as planned.

Why do all the Avengers look so unhappy at the start of the trailer?

Honestly, that’s probably footage from later in the movie after things have already gone south. No one said trailers have to go in order.

What’s up with Bruce Banner?

Of all the characters, Banner—better known to most as The Hulk—appears to be in the worst way. That’s not too surprising given that he’s the one who ends up turning into a giant green monster if his heart starts beating too quickly, but things appeared to be mostly under control by the end of the first Avengers film. Now Banner (Mark Ruffalo) is stumbling through snow-covered woods and touching hands with Natasha Romanoff aka Black Widow (Scarlett Johansson). For most people, the latter would be a good thing, but Banner has an obvious problem with getting too excited, even in a romantic way.

Who are the two kids with Ultron?

That’s brother-and-sister duo Pietro Maximoff, aka Quicksilver and Wanda Maximoff, aka Scarlet Witch. (You may recognize them from the end credits scene in Captain America: The Winter Soldier.)

So they’re bad too, huh?

Certainly looks that way at the moment. Whether that remains the case has yet to be seen.

What can they do?

Without giving too much away, the trailer makes it look like Quicksilver has some sort of super-speed and Scarlet Witch can do something not entirely dissimilar from Gambit’s manipulation of kinetic energy. Quicksilver also appeared in X-Men: Days of Future Past, but the two characters have some differences. (Marvel Studios doesn’t own the rights to the X-Men or Spider-Man franchises, leading to all sorts of weird discrepancies like this.)

What does Tony Stark mean when he says, “It’s the end. The end of the path I started us on?”

As mentioned above, Stark was the one responsible for creating Ultron. We saw in Iron Man 3 what a couple dozen automated Iron Man suits could do. Imagine that, but multiplied by an unknown and coupled with Ultron’s aim to wipe out humankind. Sure must look like the end.

And how about that enormous Iron Man-looking thing that the Hulk fights?

That’s the appropriately titled “Hulkbuster armor,” designed to enable the wearer to hold his own against the Hulk. We can’t know for sure, but it’s as good a bet as not that Tony Stark isn’t the one inside that armor. Or it is Stark, and he had to get his pal Bruce under control for some reason — one major Marvel comic book plot sees Stark deciding the Hulk is too dangerous to stay on Earth, so Stark banishes the green beast to his own unpopulated planet. We’ll have to wait and see on that one.

Why is Thor hoisting Tony Stark in the air by his neck at the 1:40 mark?

Could be one of any number of reasons. Thor and Stark have never gotten along particularly well, plus Stark is directly responsible for the rise of Ultron. Or it could be something else entirely. There have been rumors swirling that the next Captain America film will feature something like the Marvel comics’ Civil War series, which pitted superhero against superhero in a struggle over civil rights (more on that here). Clearly, the cracks are starting to show.

You got it. Odds are that Cap won’t die in this film (Chris Evans is signed on for at least two more pictures), but Joss Whedon has proven himself willing to kill main characters if the circumstance require it.

So this is going to be a darker Avengers than the first one?

Well the first one wasn’t exactly cheery (what with an alien invasion of earth and the partial destruction of midtown Manhattan), but if you’re basing it on internal strife amongst the Avengers and a force that makes the group question its very nature, then yeah, this one looks like it’ll be pretty heavy.

When do we get to stop speculating and actually see this thing? 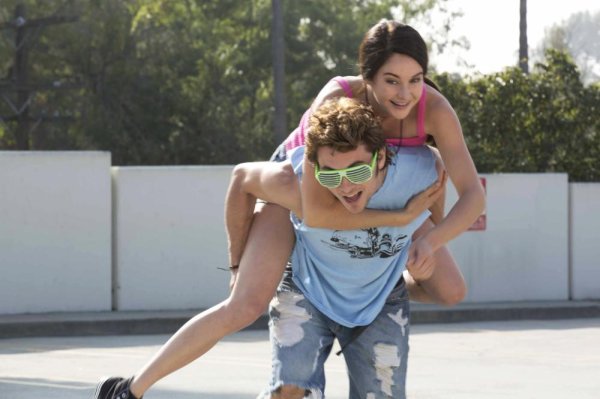 REVIEW: 'White Bird in a Blizzard': Snow Job for Shailene Woodley
Next Up: Editor's Pick