Canadian Police Say Gunman Was Hoping To Go to Syria

A soldier locks the gates as flowers are placed at a memorial outside the gates of the John Weir Foote Armory, the home of the Argyll and Sutherland Highlanders of Canada in Hamilton, Ontario, on Oct. 22, 2014, in memory of Canadian soldier Nathan Cirillo
Aaron Lynett—AP
By Noah Rayman

The suspected gunman who killed a Canadian soldier in Ottawa and then stormed Parliament before being killed himself Wednesday was waiting for a passport and hoping to travel to Syria, a top police official said Thursday.

At a news conference Thursday afternoon, Royal Canadian Mounted Police Commissioner Bob Paulson said the lone suspect, Michael Zehaf-Bibeau, a Canadian citizen who is reported to be a convert to Islam, was not previously under surveillance by Canadian authorities, but passport authorities had not yet determined whether to issue him a passport.

“I think the passport figured prominently in his motives,” Paulson said. There was no connection between the attack Thursday and an assault on Monday in Quebec, when a man ran over two soldiers, killing one before the assailant was gunned down by police, according to Paulson.

The slain soldier, Cpl. Nathan Cirillo, was shot early Wednesday while on guard at Ottawa’s War Memorial, which stands just steps from Parliament Hill. The gunman then stormed Parliament itself, with shotgun blasts fired just outside the chamber where Canadian Prime Minister Stephen Harper was speaking to legislators before being hustled out of the building. A Globe and Mail reporter captured the following violent, but not graphic, footage from inside Parliament:

“We will not be intimidated. Canada will never be intimidated,” Harper said in a televised address later Wednesday, adding that the incident will lead to a redoubling of Canada’s efforts to fight terrorism. Canada this month said it would send six jets to join the coalition airstrikes against the Islamic State of Iraq and Greater Syria, or ISIS.

President Barack Obama decried the attack on Wednesday as “outrageous,” telling reporters, “Obviously we’re all shaken by it.” Security was tightened at Arlington National Cemetery outside Washington in light of the Ottawa shooting, the Associated Press reports.

Members of parliament gathered at the National War Memorial Thursday morning and then convened as scheduled on Thursday.

Read next: The Ottawa Attack ‘Changes Everything’ and Hopefully Nothing at All 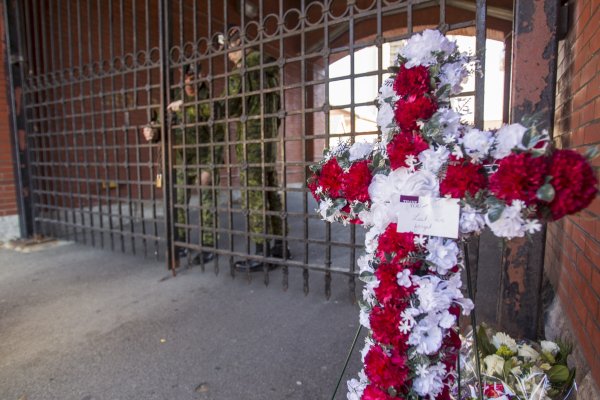 Ottawa Shooting Changes Everything — and Hopefully Nothing at All
EDIT POST