President Barack Obama speaks to the media after holding a meeting with his newly-appointed 'Ebola Response Coordinator' Ron Klain, along with other members of the team coordinating the Obama administration's ebola response efforts, in the Oval Office of the White House in Washington on Oct. 22, 2014.
Jim Lo Scalzo—EPA
By Zeke J Miller

President Barack Obama said Wednesday he is “cautiously more optimistic” about efforts to keep Ebola from spreading in the United States as his administration looks to centralize its response to the disease.

Speaking to reporters following a meeting with aides, including his new “Ebola Response Coordinator” Ron Klain, Obama expressed relief that many of those who were potentially exposed to the first U.S. victim, Thomas Eric Duncan, have made it through the 21-day incubation period without contracting symptoms.

“What we’re seeing is that the public health infrastructure and systems that we are now putting in place across the board around the country should give the American people confidence that we’re going to be in a position to deal with any additional cases of Ebola that might crop up without it turning into an outbreak,” Obama said, reiterating that “the prospect of an outbreak here is extremely low.”

“If people want to make sure that, as we go into the holiday season, their families are safe, the very best thing they can do is make sure that everybody in their family is getting a flu shot, because we know that tens of thousands of people will be affected by the flu this season, as is true every season,” Obama said.

Klain, a longtime Washington political operative, began working in the West Wing Wednesday to lead the administration’s response to the epidemic in West Africa and efforts to keep it from U.S. shores. He is reporting to National Security Advisor Susan Rice and Obama’s Homeland Security and Counterterrorism Advisor Lisa Monaco.

Obama referenced the two Dallas nurses who contracted Ebola after treating Duncan, noting they appeared to be recovering. “Again, we’re cautiously optimistic,” Obama said. “They seem to be doing better. And we continue to think about them.” The president highlighted new CDC standards for personal protective equipment which were put in place following those infections.

“We’re going to systematically and steadily just make sure that every hospital has a plan, that they are displaying CDC information that is currently been provided so that they can take step-by-step precautions when they’re dealing with somebody who might have Ebola,” Obama said. 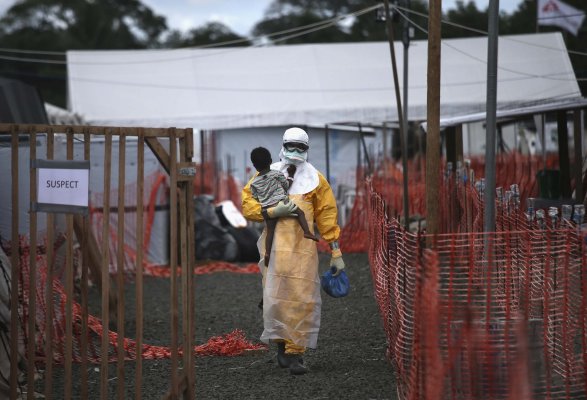 Ebola Testing
Next Up: Editor's Pick