The dying at the tin-roofed clinic in the rural Kono district of Sierra Leone comes at a ruthless pace. In the first two weeks of October, 20 out of the 22 patients seeking treatment for Ebola died. That fatality rate, high even by the lethal standards of Ebola, could easily be brought down, says Dan Kelly, an infectious-disease doctor who is currently in Kono with the Wellbody Alliance, a medical nonprofit organisation he set up eight years ago. “The ability to test for Ebola, to test quickly, has become ever more important,” says Kelly, who believes the high death toll in the Kono clinic was due in part to the fact that there is no place to test for Ebola in the entire district. Instead, blood samples from suspected Ebola patients have to be sent to the capital over rutted mud roads that are often washed out by rain. “Even if we have the best treatments available, without a timely diagnosis people are still going to die,” says Kelly.

Work out quickly who does and does not have Ebola and you’ll get a long way toward stopping an outbreak that has killed at least 4,877 and infected thousands more. Right now that simple proposition can feel like a fantasy. In Guinea, Sierra Leone and Liberia, the three countries with the most cases, the need for rapid test results far outpaces the capacity to carry them out.

That means patients often aren’t getting treatment until it’s too late, when the disease has ravaged their bodies beyond repair, and when they may have already infected friends and family. “If patients are promptly diagnosed and receive aggressive supportive care, the great majority, as many as 90%, should survive,” wrote the global health expert Paul Farmer in a recent issue of the London Review of Books.

Even in a top U.S. laboratory it can take up to eight hours to search a blood sample for Ebola through an expensive and complex array of technical hardware and computer software called a polymerase chain reaction (PCR) test. The U.S. Centers for Disease Control and Prevention and the U.S. military have helped by setting up four additional labs in West Africa over the past six months—Liberia now has a total of five, Sierra Leone four and Guinea three—but capacity is still limited to about 100 tests per lab per day, not nearly enough to cope with an epidemic that could grow to 10,000 new cases a week by December, according to the World Health Organization. Laurie Garrett, an expert on Ebola at the Council on Foreign Relations and author of The Coming Plague: Newly Emerging Diseases in a World Out of Balance, says that number could be brought down through better testing. “The only thing that makes a dent when you model what is going on with the epidemic now and what it looks like in two months, is being able to separate the infected from the non-infected.”

Health care workers on the ground say that more PCR labs are urgently needed. “Crushing this epidemic means getting 70% of the population with Ebola into isolation and care,” Kelly says. That could be achieved, he believes, by putting a PCR lab in every district.

The challenges don’t stop there. Testing can create risks even as it offers solutions. Medical personnel must draw blood from patients for a PCR test, a potentially lethal process for caregivers. “Taking samples is extremely dangerous,” says Dr. Estrella Lasry, a tropical medicine adviser in Liberia for Doctors Without Borders (MSF). “At any time you risk a needlestick injury that can expose you to the virus.”

And then there’s the risk that patients without Ebola are being exposed to patients with the disease. Lasry estimates that 30% to 50% of people coming into the MSF clinics end up testing negative for Ebola and instead have other illnesses like malaria that have similar early symptoms. All those being tested for Ebola must wait in holding centers for their results, to ensure they don’t have an opportunity to infect others back at home if they test positive. That means patients with other illnesses must wait among patients with Ebola, increasing the chances of transmission.

Kelly hopes researchers can develop a test that could give readings at a clinic immediately and wouldn’t require trained technicians to interpret the results. “It would be a game changer if you could immediately identify patients needing quarantine from those who do not,” he says. Several versions of so-called point-of-care rapid diagnostic tests are already in development, but while some are at the testing stage, it is not clear when they could actually be used on the ground.

One U.S. company, Corgenix, received a $2.9 million grant in June from the National Institutes of Health to perfect its prototype, a pregnancy-test-style slip of paper that reveals a dark red line within 15 minutes when exposed to a drop of Ebola-infected blood. Instead of needles and syringes, test takers need only a pinprick to get the sample, much like an insulin test for diabetes patients. These tests, which would cost anywhere from $2 to $10 (PCR tests average about $100 each) could also be used in airports to confirm whether someone with symptoms has Ebola.

If the Corgenix test had been available, says one of its lead researchers, Robert F. Garry, a professor of microbiology and immunology at Tulane University School of Medicine in New Orleans, it might have helped diagnose Amber Vinson, an American nurse infected with Ebola, before she boarded a flight from Cleveland to Dallas on Oct. 13. “This is a test that could be used anywhere you would want to test for Ebola,” says Garry. “Anyone could use it, and anyone could read it.”

With the epidemic worsening in West Africa, medical staff in Ebola-hit countries can’t afford to wait for companies like Corgenix to bring their product to market. Kelly has been hearing about better, faster tests almost since he started working on Ebola in June. He fears that pinning hopes on future technologies undermines efforts to ramp up testing facilities. “Everyone says they have a new test, but at this point I’m like, ‘Show me the money,’” says Kelly. “ We already have a working technology that is deployable. Get me a PCR in every district capital, and then we can start talking about faster tests.”

Garry says he has people in every U.S. time zone working “as fast as humanly possible” to get the Corgenix test out. “We want to make an impact on this outbreak,” he says. “With enough tests, we can shut it down it down.” Without them, Ebola may be here to stay. 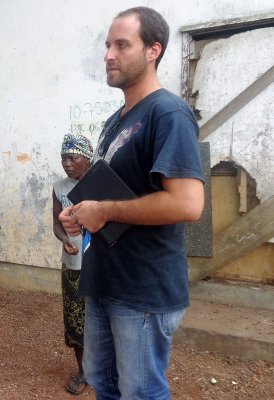 Ebola Survivor Speaks Out: 'Blessed to Be Alive'
Next Up: Editor's Pick