Supporters of murdered Filipino transgender Jeffrey Laude, also known as "Jennifer", hold a protest near the Hall of Justice where the preliminary hearing for the murder case is being held at the northern Philippine city of Olongapo on Oct. 10, 2014.
Noel Celis—AFP/Getty Images
By Eliza Gray

A U.S. Marine suspected in the Oct. 11 murder of a Filipino transgender woman has been transferred from a U.S. warship to the custody of Philippines military, police said Wednesday.

The Philippine police said the suspect, whom they have identified as Private First Class Joseph Scott Pemberton, went to a local motel in Olongapo City, close to the Subic Bay port, which often hosts U.S. ships, with 26-year-old Jennifer Laude, and was seen leaving the hotel room 30 minutes later. Laude’s strangled body was found by a hotel employee, her head in the toilet bowl of one of the rooms. An autopsy report cited the cause of death as “asphyxia by drowning.” Two used condoms were also found in the room.

Pemberton, who awaits formal charges, was held for several days on the U.S.S. Peleliu warship in Subic Bay. The Marine was in the Philippines for a long-standing joint military exercise between U.S. Marines and their Philippine counterparts, which involved 3,500 American troops and ended Oct. 10.

The homicide case has ignited tensions over a defense agreement between the U.S. and the Philippines that allows the U.S. to keep custody of military personnel during criminal proceedings for crimes committed in-country. Vocal opponents of the agreement have called for its abrogation, saying that the deal is lopsided in favor of the U.S.

In what could be seen as a compromise by the U.S., the Marines have transferred Pemberton to an air-conditioned vehicle inside Camp Aguinaldo, military headquarters of the Armed Forces of the Philippines in Quezon City. The vehicle will still be guarded by U.S. troops, but will be located inside a fenced-off portion of the camp guarded by Philippine personnel, according to the Wall Street Journal.

The U.S. Marine Corps issued a statement to clarify that the “Marine will remain in the custody of the United States pursuant to the Visiting Forces Agreement (VFA) with the Republic of the Philippines.”

The U.S.S. Peleliu has been authorized to leave the Philippines. 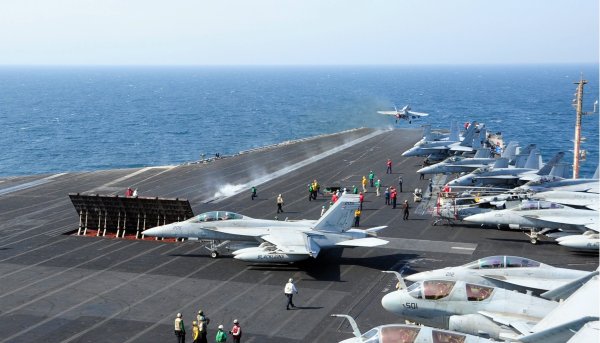