Jennifer Garner, who’s starting to flex her political muscles a bit more in her work with Save the Children, is also speaking out about that old bugbear, sexism in Hollywood. “The fact that there even needs to be a Women in Hollywood event is a little bit sad,” Garner said at Elle magazine’s Women in Hollywood celebration.. “I mean, the men in Hollywood event is every day—it’s called Hollywood. Fifty-one percent of the population should not have to have to schedule a special event to celebrate the fact that in an art that tells the story of what it means to be human and alive, we get to play a part.”

Garner, who recently sat down with Time to talk about her movie Men, Women & Children, in which she plays an overprotective mom, likes being known for her parenting skills. When told that she is known on the internet as “America’s most relatable celebrity mom,” she said she had no problem with that. “That’s great with me. I really appreciate that, internet,” she joked.

But at the Women in Hollywood event, Garner pointed out that she and her husband Ben Affleck get treated very differently. “My husband and I do kind of the same job, a little bit. Not long ago we both had one of those magical days, we call it a junket, where we both attended these lovely events where people come in every four minutes, they ask the same questions over and over again.” When they got home, the couple compared notes. “ I told him every single person who interviewed me, I mean every single one, and this is true of the red carpet here tonight Elle, asked me, ‘How do you balance work and family?’ and he said the only thing that people asked him repeatedly was about the tits on [his Gone Girl co-star Emily Ratajkowski], which, for the record if we’re talking about them, they are real and they are fabulous. Take a look and enjoy.”

Also for the record, at Time’s interview, we didn’t ask her about work life balance. We asked her about sex ed instead. See the video below. 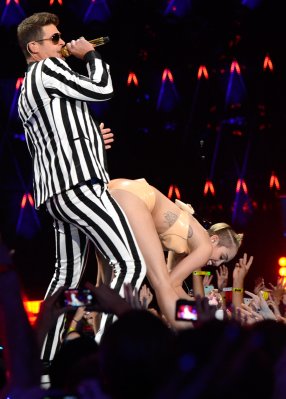 Annie Lennox: 'Twerking Is Not Feminism'
Next Up: Editor's Pick