I’ve always been the one who feels a knee-jerk need to apologize for everything.

Very often I mean it. When you’ve had a bad day, when something sad or terrible happens to you, when I’ve done something stupid and my actions warrant an apology, you can count on me.

When an actual “I’m sorry” is necessary, you’ll never find a person more willing to gnaw on a piece of your frustration, anger, or sorrow with you. These past few years, I’ve been making a concerted effort to divvy out my “I’m sorries” much more judiciously so that they actually MEAN something. Most people deserve something more than a breathless attempt at smoothing things over.

However, when I’m nervous, unsure, or feeling guilty (whether it’s necessary or not), “I’m sorry” can become my version of “Oops” or worse, “Don’t you think you should say the same?” Ugh, passive-aggressive BS.

Lately, through all the struggles and victories of living in Japan, I’ve found “I’m sorry” popping up more and more in my English vocabulary. Some of it is an attempt at cultural acclimation, some of it is just plain old Default Louise trying to absorb some sort of real or perceived faux pas.

I could spend thousands of words talking about how I got this way — upbringing, social anxiety, people pleaser, self preservation, fear of judgement, blah blah blah — but whatever all of that amounts to, and while I begrudgingly accept this part of myself, it’s a part of me that is at times wholly useless.

For crapsake, I’ve caught myself apologizing to a table I jammed my toe on. The table didn’t care, and neither did all the people who weren’t there to witness it. The table and I are still friends.

I’m fully aware that an onslaught of apologies when I have no reason to be sorry is not only annoying but can be vaguely offensive. No Lou, you’re not sorry when the words just tumble out. What I’m actually saying is, “Don’t blame me” or “I feel dumb.”

I really started paying attention to how I handed out apologies when a dear friend and professional mentor finally snapped at me.

“Louise, cut out the ‘I’m sorries.’ You’re better than that. You don’t mean it, and you don’t have to. Don’t waste your words. Mean what you say.”

It’s an ongoing battle. “I’m sorry” is not a prefix, a suffix, a qualifier, or a “Get Out of Jail Free” card for when I’m uncomfortable. But in Japan, I’m having to negotiate the “I’m sorries” in a whole new way.

From what I’ve observed so far, Japan is a culture of apologies. I’m not saying that Japanese people are insincere or pushovers. Far from it. Rush hour in a busy subway station or negotiating with the friendly but unwavering cell phone salesman over the up front, one year service payment due in CASH, will teach a person that right-quick.

What I am saying is that as a culture that is incredibly polite, sensitive, and gracious, apologizing is part of formal interaction. “Apologize first” is just the way things are done here. Often times when I’m out and about with fluent Japanese speakers, I’ll hear the nugget of a request or question imbedded deep within profuse apologies and slight bows. Yet despite the social requirement, people really seem to mean it when they apologize.

“Excuse me, I’m sorry that I don’t know what this purple thing on your menu is. I’m sorry. Thank you!”

You’d think my compulsively apologizing little heart would rejoice! Well, it did at first. Every accident, every mistake, could be cleared with a “sumimasen” (I’m sorry). It was expected, it was welcomed, it was glorious.

But you can imagine the slippery slope this started. The apologies started seeping into my non-Japanese interactions.

Since I’ve noticed my compulsion rearing its head again, I’ve been sorting through a duality I’ve never encountered before.

No, there isn’t some feral Louise roaming the streets of Yokohama maniacally apologizing to vending machines and gurgling infants, but this is my first experience immersing myself in a foreign culture and finding the balance between Japan Louise and American Louise is something that requires much more self awareness than I thought I was capable of.

I need to play by Japan’s rules to some extent. There is some pleasure in losing myself in the foreignness of it all, and just doing as I’m expected to do. It’s not always easy, but in the middle of it there’s a lesson in unclenching my ego. Japan doesn’t care if I find their customs “unusual” or “compromising” to my “individuality.” Their definitions of such are different, work just fine for most Japanese people, and have been around a lot longer than me.

When I find myself getting my kittens in a twist, I just remind myself that I don’t have to drink the Kool-Aid but I do have to respect it.

Look at me making discoveries all over the place!

But while I’m discovering all this in the context of my Japan life, I’m realizing that this is not an all-or-nothing situation. I can pass a lot of my Japanese cultural experience through my American filter.

I’m learning that ideally, the basic intent is the same anywhere: Be considerate of other people, and if you’re going to say, something say it with conviction. In other words, mean what you say.

When the Japanese people I’ve met here apologize, it appears as if they are genuinely sorry for having bothered me, that they appreciate that my time is valuable. They say it because it’s expected, but the intent is also expected. It’s not just empty words. There’s an unspoken willingness to start from a place of respect and go from there. I’m making a generalization — I’m new here and probably a little naive, but there is still something to be learned in that kind of interaction.

So while I don’t want to adopt the cultural norm of constantly apologizing, my constant apologizing within the context of my western culture can be quelled by taking a few lessons from the intentions of the people here.

I’m still working at it. There are still times I have to clamp my mouth shut to stop myself from apologizing to my American friends for the sound my nose makes when I breathe, but I’m making an honest effort to live by the mantra, “Mean what you say.”

During this time of trying to learn a foreign language, being keenly aware of every word that comes out of my mouth, I find that it’s worth applying that logic to my mother tongue. English may be easy for me, but it does not have to be thoughtless.

Louise Hung is a writer and theater director. 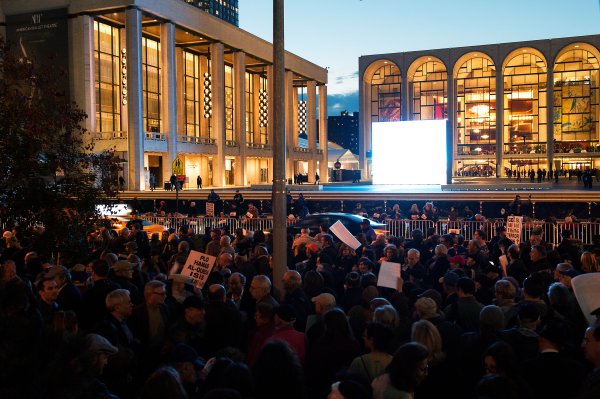 'Death of Klinghoffer': Private Grief Turned Into Public Entertainment
Next Up: Editor's Pick