I tell people about my reproductive organs in excruciating detail and advocate for egg freezing on an almost daily basis.

It’s my job as a patient care advocate for a fertility center, and I love it. I see no evil Big Brother plot to control women’s lives. I see it as options.

Since I’ve started planning these egg-freezing parties, we quickly started to see some people lose their minds over the issue.

One accused us of using scare tactics, another said we were encouraging women to have “bastards” and another claimed we were trying to do away with men.

Enter Facebook and Apple’s news this week that they would now be paying for their female employees to freeze their eggs, and the freaking out has reached a whole new level of lunacy.

Let me tell you why these benefits are a good thing — and not in fact an Orwellian attempt by Silicon Valley geeks to control your fertility future.

First, let me tell you my story: I met my husband at age 33. We got married when I was 34 and we starting trying to conceive soon after. What followed was years of doctors, invasive tests, various forms of fertility treatment and a lot of heartache and disappointment. By the time we were doing our third in vitro, we had depleted our savings account and only had one embryo. At the time, it literally felt like everything was riding on that lone embryo; our marriage, our finances, our hopes, everything. Through luck and good odds, I was fortunate enough to get pregnant on that cycle. Even though I was more grateful than I could possibly say for our now two-year-old son, I pressed my doctor as to why she thought we had issues. The only explanation was my age.

I never thought that early to mid-thirties was old or even questionable in terms of fertility. In my mind, the forties are when things really go downhill. As I’ve learned over the years, I’m not the only one who thought this way. Dr. Anate Brauer from Greenwich Fertility told me, “What people don’t understand is that even at age 30 years old, up to 40% of your eggs are genetically abnormal.”

After going through my experience, I became very active in the infertility community and switched jobs. I’ve been working as the director of patient care at Fertility Authority for over two years and you would be shocked at how many women don’t know anything about their own bodies, that age is a real factor when it comes to fertility or even how one actually gets pregnant.

My theory is when were in health class, they told us all about how NOT to get pregnant or get an STI but no one really explained how to conceive and the fact that we live in a time where more and more women are delaying having children.

A very important piece of blood work that women should get is called your “day three blood work.” This is when your blood is taken on day three of your menstrual cycle and informs you and your doctor what your FSH (follicle stimulating hormone) and your AMH (anti-mullerian hormone) numbers are. These two aspects will give you an idea of how many eggs you have in storage (so to speak) and the quality. This is an extremely important test and yet, if I left my office right now, stopped a woman on the street and asked her if she knew what her FSH and AMH was, she’d think it was an acronym used on Twitter. Shouldn’t this be general knowledge or part of your yearly checkup? Why aren’t women more aware of this?

Isn’t it a good thing that Apple and Facebook are helping more women BE aware? Not to mention helping them pay for what can be insanely costly?

In effect, I look at myself as the “ghost of infertile future” hoping to educate and empower women who perhaps are going to medical school, law school, trying to climb the corporate ladder or who are actually waiting to meet the right partner for them instead of settling out of some biological fear. It used to drive me insane when I was single and people would say, “Your standards are too high!” If you make the commitment to marry and spend the rest of your life with someone, shouldn’t you have high standards? And what does that say about their own marriages? That their standards were low?

Also, if you take into consideration that in the last four decades, there has been a 900% increase in women over 35 having their first baby, it makes sense that companies at least make this offer of egg freezing to their employees should they want to explore it. You also have to be aware that typically, if you’re over the age of 42, most clinics recommend you use donor eggs as the quality of your eggs drop significantly. Basically, companies aren’t forcing their female staff to go through with egg freezing, they are just making the option available if you know you may want to conceive down the line using your own eggs.

This is why I don’t fully understand why so many are offended by egg freezing. It’s not mandatory and in the long run, it may save both the company and their female employee’s time and money. It cost me roughly $35,000 and three years with time in and out of work for my medical procedures to have my son. One cycle of egg freezing can cost around $10,000 and can possibly not only spare you from having to go through years of fertility treatment but save you additional money on exploring other options such as using donor eggs which can cost a profound amount.

I saw one comment yesterday by a man saying that the fact that companies were offering this was unfair to men. After I was done laughing, I commented back to him that this is not favoritism to women. It’s just biology. Steve Martin became a first-time dad at age 67 years old. I’m pretty sure it’s common knowledge that Helen Mirren wouldn’t be able to do this (even as amazing as she is). Men don’t need this option as they do not have limitations on their fertility while women do. We can argue all day about whether or not you believe in Sheryl Sandberg’s “Lean In” advice but whether you lean in or not, top female talent at companies like Facebook and Apple might appreciate having the assurance of egg freezing.

And assurance is the key word here.

As Dr. Fahimeh Sasan, chief medical officer at my company and a gynecologist at Mt. Sinai, said at our event this past Tuesday, “Just because you freeze your eggs doesn’t mean you have to conceive that way! You can still get married, conceive naturally and end up never using the frozen eggs. They are just insurance should you find that you have difficulty getting pregnant and you prefer not to use donor eggs. It’s like car insurance. No one buys it expecting to get into an accident but it’s there if you need it.”

See? No one is replacing egg freezing with conceiving naturally or even relationships. Even in the best case scenarios, “car insurance” doesn’t always protect you from everything so it’s extremely important to note that there are no guarantees with egg freezing. I can’t say for certain that it will completely spare you from additional fertility treatment beyond the in vitro needed for the eggs you’ve frozen. It’s just a back-up plan should you need it. That being said, pregnancy rates from frozen eggs are currently the same as they are fresh eggs, so it is a viable option to explore.

As for the criticism that companies should put the money and energy instead into offering paternity leave for men or providing in-house childcare for parents; my question is why is it an either-or proposition? Why can’t companies offer all of the above? I know many feel that it’s not an employer’s responsibility to accommodate people’s personal lives but I contend that if you value your workers and want to retain them, it’s a valuable investment.

Another major complaint I’ve heard about egg freezing is it encourages women to have babies in their fifties. Again, this is just ignorance.

Dr. Brauer explains, “We know that carrying a pregnancy at an advanced age increases complications of pregnancy such as hypertensive disorders or pregnancy, gestational diabetes, placental abruption and growth restriction. Because these risks increase as a woman progresses into her late thirties and forties, most clinics have established an age cut off, usually in the late forties.”

This is true even when using donor eggs. It’s not like there are no age restrictions and that the industry is telling women old enough to be grandmothers to have their first child. There are guidelines.

Here’s the bottom line: If you are a woman interested in having children and are not yet ready for any reason whatsoever, just see your OB/GYN or a reproductive endocrinologist, get your AMH and FSH, tell them your history (do you smoke, have diabetes, etc.) and find out if you are fertile or if you have any issues. Through my job, around 20% of women who contacted us for an egg freezing consult found out they had a fertility issue they knew nothing about. One had blocked fallopian tubes, another was going into early menopause and one in particular sadly found out she wouldn’t be able to have any biological children. All of these women were in their thirties and absolutely had no idea there was any problem with them whatsoever.

Educating women on knowing their fertility health is so incredibly important. Whether they freeze their eggs, whether it’s moral or not is no one’s business. It’s between them, their doctor and whatever god they choose to worship.

Jennifer Palumbo is a writer and former stand-up comedian. 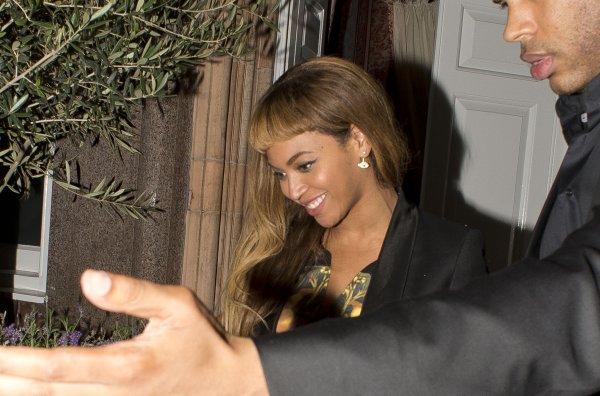 I’d Like to Talk to You About Not Talking About Beyoncé’s Bangs
Next Up: Editor's Pick