For New York City’s Metropolitan Opera, this week has been one in which the relationship between art and history got a little bit more complicated, as Monday’s opening night of the John Adams opera The Death of Klinghoffer provoked protests. Those opposed to the production, who included former New York City mayor Rudolph Giuliani, believe that the opera glorifies terrorism in the way it presents the story of those who caused the titular death; those who support it say that the opera, though about the 1985 murder of Leon Klinghoffer, does not celebrate the people who killed him. At its heart, the controversy is about the difficult distinctions between expression and endorsement–and perhaps even the very purpose of art.

But it’s also bound to raise a much more easily answered question, at least among younger observers of the debate: who was Leon Klinghoffer and what happened to him? Some hecklers reportedly yelled during the performance that his murder should never be forgotten, and there’s no sign that the opera’s supporters would disagree with that statement.

TIME covered the murder in the Oct. 21, 1985, issue, as a key element in a cover story about terrorism. As the magazine reported, the Achille Lauro was an Italian cruise liner taking about 750 passengers around the Mediterranean; those on board included 11 friends from New York and New Jersey, brought together by Marilyn Klinghoffer, who celebrated her 59th birthday during the trip. Leon Klinghoffer, Marilyn’s husband, was confined to a wheelchair after having had two strokes.

The ship also carried four other passengers, terrorists from the Palestine Liberation Front who supposedly planned to attack when the ship reached the city of Ashdod in Israel. But according to an Italian report at the time, after a waiter saw them with their guns they decided to launch their attack early, hijacking the ship and ordering the captain to steer the ship toward Syria. If their demands — for the release of 50 prisoners being held in Israel — were not met, they would begin to kill their hostages.

After it became clear that no nation would allow the hijacked ship to dock and the PLF negotiated for the hijackers to leave the ship, the Klinghoffers’ children were told that all of the passengers were safe. Hours passed before the State Department informed them that their father had not been found. About two days passed before the U.S. Ambassador to Egypt announced that Leon Klinghoffer had been murdered.

Marilyn Klinghoffer — who reportedly told President Reagan that she spat in the terrorists’ faces when asked to identify them in a line-up, to which he responded “You did? God bless you.” — died of cancer the following year. The opera The Death of Klinghoffer premiered a few years later, in 1991, in Belgium. Though it was controversial then as well, TIME’s critic Michael Walsh wrote that fears over the subject matter should not keep it from the ranks of operatic greatness. “Just as the lyrical and deeply humanistic [Nixon in China, an opera by the same creative team] confounded many who had expected a leftist demonization of the old unindicted co-conspirator,” he wrote, “so has this sweet, sorrowful Klinghoffer upended everyone’s expectations.”

Read TIME’s review of the premiere performance of The Death of Klinghoffer, here in the archives: Art and Terror in the Same Boat 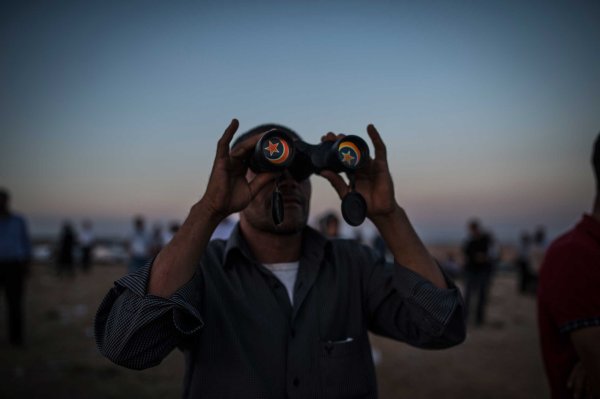 Watchdog Group Says ISIS Has Warplanes
Next Up: Editor's Pick