Voters in Bangkok express anger as they are unable to cast their ballots during Thailand's general elections on Feb. 2, 2014. Many polling stations were blocked by protesters
Paula Bronstein / Getty Images
By David Stout / Bangkok

Thailand has been left in constitutional limbo after antigovernment protesters succeeded in preventing the election of enough representatives to form a new government.

Boycotts instigated by the People’s Democratic Reform Committee (PDRC) — along with intimidation and obstruction of voters during Sunday’s poll — meant that the number of legislators elected is below the constitutionally required minimum for a government and the selection of a Prime Minister.

“The elections did not produce 95% of elected members of the lower house thanks to blockages by Suthep’s forces,” Paul Chambers, the director of research at the Institute of Southeast Asian Affairs at Thailand’s Chiang Mai University, tells TIME, referring to protest leader Suthep Thaugsuban.

“A formal announcement is to be made today by the Election Commission,” he says. “But there is no way that the required 475 members can be reached. Depending on the announcement, we will know how many more parliamentarians are needed to reach the 95% quorum.”

According to statistics compiled by the Nation, approximately 12 million people were prevented from heading to the polls, either on Sunday or during rounds of early voting on Jan. 26. More than 10,000 polling stations did not open and 37 constituencies canceled voting, as well.

The Election Commission reported on Sunday that poll closures nationwide affected approximately 18% of Thailand’s 48 million registered voters, according to the Associated Press. Voter obstruction in the capital, where the PDRC has a large share of its supporters, was particularly serious, with some estimates suggesting that nearly three-quarters of Bangkok’s eligible voters did not cast a ballot.

“The public is not against elections, but they want more democratic elections, ones that are free and fair and clean,” said a defiant PDRC boss Suthep during an interview with TIME on Sunday. “This is why the masses are not voting today and this is why they’re calling for reforms before elections.”

Suthep insists that an overhaul of the country’s electoral laws, decentralization of government authority, addressing poverty and abolishing the statute of limitations for corruption charges must all be initiated first before elections. Based on his calculations, the process would take up to 18 months to complete and would be overseen by an appointed council.

For now, embattled Prime Minister Yingluck Shinawatra will continue to head a caretaker government, but as well as facing mass demonstrations, her administration is the target of several legal challenges, including a motion for her impeachment over a failed rice-subsidy program.

“I think that the various legal challenges through the courts are actually quite serious,” Tim Huxley, executive director of the International Institute for Strategic Studies’ Asia office, tells TIME. “It could be that they bear fruit for those that are against Yingluck.”

According to Chambers, pending court actions could lead to the dismissal of “all ministers who are part of the caretaker government.” A new caretaker cabinet would have to be appointed, which he concedes could be “archroyalist in nature.” 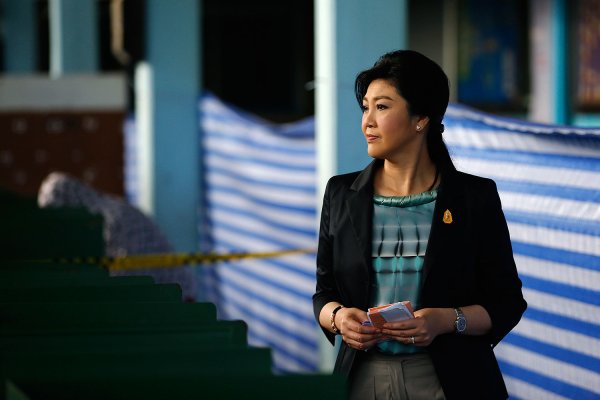 Elections Expose an Increasingly Bitter Divide in Thailand
Next Up: Editor's Pick