Construction sites and vacant streets in Tianjin, China. The new central business district, under construction in Tianjin, was touted as another Manhattan, but is now a ghost city. The nation's slowing economy is putting the project into jeopardy
Zhang Peng—LightRocket/Getty Images
By Michael Schuman

Those who remain hopeful about the future of the Chinese economy got some extra evidence to bolster their case today. On Tuesday, the government announced that GDP in the third quarter rose by a slightly better-than-expected 7.3%.

But don’t get too excited. That 7.3% is the slowest quarterly pace in five years — since the depths of the recession after the 2008 Wall Street financial crisis. And it was pushed higher likely by exports. In other words, external demand, not investment or consumption in the domestic economy.

There is really nothing surprising about these figures. This is China’s new normal. The double-digit pace the global business community has come to expect is very likely a thing of the past. More and more economists are predicting that China’s growth rates will continue to slow over time. The International Monetary Fund, for instance, sees growth dropping from 7.4% this year to 6.8% in 2016 and 6.3% in 2019.

There are too many factors at work slowing down the Chinese growth machine. First of all, no economy can grow 10% a year forever, not even China’s. The country is no longer the impoverished backwater it was in the early 1980s, when Beijing’s market reforms first sparked its growth miracle. It is now the second largest economy in the world, and the bigger China gets, the harder it becomes to post such large annual GDP increases. There are also structural forces at work. China’s population of more than 1.3 billion is aging rapidly, thanks in part to Beijing’s restrictive one-child policy, and that will act as a long-term drag on growth. The workforce is already shrinking.

The only question is: How slow will China go? The answer depends on how optimistic you are that China’s current leaders can fix the very serious problems plaguing the economy.

Aspects of the growth model that have driven China’s exceptional performance — state-directed investment, easy credit — have now come to spawn all sorts of new risks. Debt levels at Chinese companies have risen precipitously, money has been wasted on excess capacity and unnecessary construction, and bad loans at Chinese banks have been rising as a result. The economy is paying the price.

A big reason behind the country’s slowdown today is the deteriorating property market, brought low by irrational exuberance and excessive building. Official data shows that the amount of unsold real estate has doubled over the past two years, and that has caused prices to fall and investment in new developments to dry up. The central bank recently loosened restrictions on mortgage lending to boost sluggish demand, but most economists don’t expect such moves will stimulate a rebound anytime soon. There are even concerns that China is following a pattern similar to Japan’s when the latter Asian giant had its financial crisis in the early 1990s.

The long-term solution to these problems requires nothing less than overhauling the way in which the economy works. The country’s leaders realize this, too, and have pledged to undertake a thorough reshaping of the economy to give the private sector more influence. Policymakers intend to make the economy more market-oriented by liberalizing finance and capital flows and withdrawing the control of the state. Such steps would probably lead to enhanced productivity, better allocation of finance and stronger innovation — all things China needs badly as its costs rise with its wealth.

So far, though, there has been little progress. A free-trade zone in Shanghai, launched a year ago to experiment with freer capital flows in and out of the country, has never got off the ground. A series of investigations into the business practices of multinationals operating in China has raised questions about Beijing’s willingness to open up the economy further to foreign competition.

Of course, the liberalization Beijing has promised will take a long time to implement. But if the effort doesn’t progress, growth will likely suffer. The Conference Board in a recent report predicted that growth would slow to 4% a year after 2020, in part because its economists believe China’s leaders won’t go far enough in reforming the economy.

What this all means for businessmen and investors around the world is that China may not play the same role in upholding global growth in coming years as it has in the past. The new normal may not lift the gloomy spirits dominating global markets these days, either. But we’ll all have to get used to it. 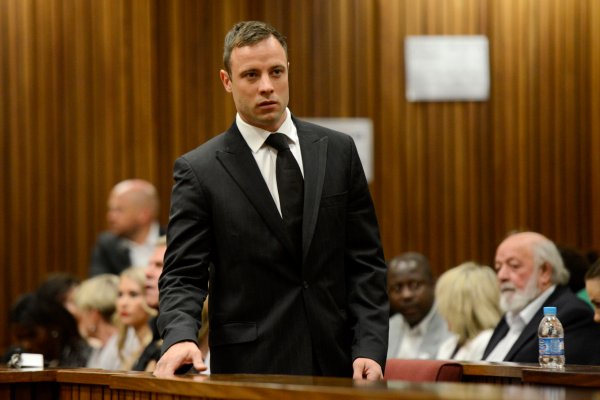 Pistorius Gets 5 Years in Prison
Next Up: Editor's Pick