Why So Many Women Are Crying at the Gym

It’s 7am on a Tuesday, at a small dance studio in Manhattan’s Tribeca neighborhood, and Taryn Toomey is stomping her feet into the floor like thunder. “Get rid of the bullsh*t!” she shouts. “Get rid of the drama!”

Two dozen women in yoga pants and sports bras sprint in place behind her, eyes closed, arms flailing. Sweat is flying. The Beastie Boys’ “Sabotage” is blaring in the background. There are grunts and screams. “Hell yes!” a woman bellows.

When the song ends, Toomey directs the group into child’s pose, torso folded over the knees, forehead on the floor, arms spread forward. Coldplay comes on, and there is a moment of rest. “Inhale. Exhale. Feel your center,” Toomey says. Heads slowly come up, and suddenly, tears are streaming down the faces of half the room. A woman in front of me is physically trembling. “I just let it all out,” a middle-aged woman in leggings and a tank top whispers.

This is “The Class”—one part yoga, two parts bootcamp, three parts emotional release, packaged into an almost spiritual… no, tribal… 75 minutes. It is the creation of fashion exec turned yoga instructor Toomey, and it is where New York’s high-flying women go for emotional release (if, that is, they can get a spot).

“During my first class I didn’t just cry, I sobbed,” says McKenzie Hayes, a 22-year-old New Yorker who has become a regular in the class. “Whether it’s your job or your relationships, I literally picture my emotional problems being slowly unstuck from my body and moved out.”

Toomey calls that “sludge”: it’s the emotional baggage we carry in our muscles that has nowhere else to go. She’s not a doctor. But week after week, she encourages participants to sweat, scream and cry out those emotions, in the company of a group of mostly women who are doing the same. “I’ve had classes where people are literally on all fours sobbing,” Toomey says. “But it’s not just my class, it’s happening everywhere. Emotional release in public can feel very uncomfortable. But I think there’s a growing movement of people who want to find a space for it.”

Indeed, the message to women has long been to hide your tears lest you look weak. (Among the tactics: jutting out your jaw. Breathing exercises. Chewing gum. Drinking water.) Yet while crying in the office may remain a feminine faux pas, tears at the gym seem to have lost their stigma — to the extent that there are a bevy of fitness courses that even encourage it.

For Asie Mohtarez, a Brooklyn makeup artist, it began in hot yoga. The music was on, the floor was warm, the instructor was standing over her encouraging her to let go. “I was in child’s pose and I just lost it,” she says. Then, two weeks later, it happened again – this time at Physique 57. The Dirty Dancing soundtrack came on and it was waterworks again. “There’s something about these classes that feel safe,” says the 33-year-old. “I can’t cry at work. I’m not emotionally distraught enough to cry in the shower. I can’t just burst into tears in front of my husband. So, what does that leave you with?”

You could go to therapy – or you could hit the gym. Women are getting teary in SoulCycle, and misty-eyed at Pure Barre. They are letting out wails in yoga and rubbing the shoulder of the weepy woman next to them at CrossFit. “I think people have started to notice that their clients are just showing up to class and just unloading, and so they’re tailoring their classes to create space for this,” says Hayes, who is a pilates instructor by day. “When I take private clients I end up feeling like a therapist for them.”

These fitness instructors aren’t trained in that, of course. But they’ve probably been there.

“I usually just go over to the student after class and quietly ask how they’re feeling,” says Kristin Esposito, a yoga instructor in Los Angeles who sees criers often. “My classes are focused on release so it feels pretty natural.”

Physiologically, it is: Exercise releases endorphins, which interact with serotonin and dopamine, the chemicals that impact mood. In yoga, deep hip openers – like the “pigeon pose” – are meant to stir emotions (yogis believe our emotional baggage lives in our hips).

But many of the newer courses are specifically choreographed to release emotion, too – making it all that much more intense. The lights are dim, candles flicker in the background. It’s not an accident that just as you’re starting to relax, coming down from the adrenaline, you’re blasted with a throaty ballad. Those playlists are meticulously constructed. “I’ve been teaching for almost 20 years, so I’ve basically seen it all: crying, laughing, throwing up, overheating,” says Stacey Griffith, a Soul Cycle instructor. “There are moments in the class that are directly programmed for that reason – but it’s not like we’re trying to get people to cry. We’re giving them the space to step outside of themselves.”

And indeed, that may be necessary. We’re busier, more stressed and more connected than we’ve ever been. Simply finding the time to have that “space” can be near impossible, making the release that these courses offer – packaged neatly into an hour – a kind of fix. “The night before, I can’t wait,” says Hayes of Toomey’s class. “I already know what will be the flood that I’m working through. And sometimes conversations with friends just don’t cut it.”

Getting those emotions out is a good thing – at least in moderation. Emotional tears contain manganese, potassium, and a hormone called prolactin, which help lower cholesterol, control high blood and boost the immune system. Crying reduces stress, and, according to one study, from the University of Minnesota, actually improves the mood of nearly 90 percent of people who do it. “You really do feel lighter after,” says Hayes.

“To me, it’s a sign of being present, it’s a sign of feeling your feelings, of being in the moment,” says Toomey, just after “the class” has ended. Plus, shoulder to shoulder in a hot room, there is almost a sense of communal release. Of high-charged emotional camaraderie. “I so needed this,” a woman tells her on the way out, with a hug. And, of course, with that much sweat, the tears are almost hidden anyway.

Read next: I Taught Fitness and Failed a Fat Test 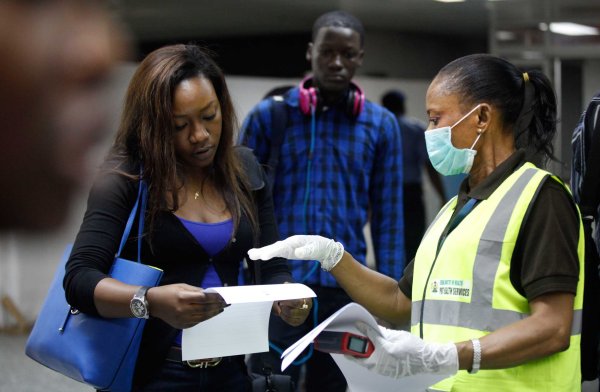 What Does It Mean for an Ebola Outbreak to End?
Next Up: Editor's Pick