Wanna know how to clear out a room in five minutes these days?

Stand in the middle of that room, making sure that you get as close to as many people as possible, and yell the following:

If you want the room cleared in less than five, cough. Or pour some water over your head to simulate sweat before entering. You may cause a stampede, but you’ll get your empty room.

Now I admit that the scenario I’ve just proposed is really irresponsible, kind of mean, a little bit childish and plays on the paranoia that naturally occurs in these situations.

But so is running stories insinuating that you can get Ebola from weave hair. I saw that on CNN. Wish I were kidding.

I also understand the fear of the unknown it engenders. Roughly 90 percent of the people who have it or have died from it are from places most Americans can’t find on a map. Eight people have been treated for it here and of those eight, only two of them — nurses Nina Pham and Amber Vinson — contracted it here. There’s only been one American death, Thomas Duncan, and he contracted it before leaving his home in Liberia.

But while I understand fear, I have no tolerance for fear mongering and the ignorance that seems to accompany it. It gives people an excuse to make scapegoats of a population that already has enough problems dealing with (a) the less than generous people who say they rule their countries and (b) the resource gouging multinational corporations that actually do.

And fear mongering has become the rule of the day when it comes to Ebola. Between the CNN hair weave story, the college in Texas that sent letters to West African students denying them admission due to the disease, and the conspiracy theorists who have crawled out of the woodwork, getting any credible information about the disease has become next to impossible.

Kind of like it was in the early days of the HIV/AIDS crisis.

I got my start as a reporter covering HIV/AIDS for the Philadelphia Tribune, the nation’s oldest continuously publishing Black newspaper. For a while, it seemed like everyone I interviewed died, which led to a lot of assignments that ended with my sitting in my car with my head in my hands.

When you cover something like that you remember how it made you feel. So finding the parallels between Ebola and HIV weren’t hard to spot for me.

Like Ebola, you had people who believed that (a) it was manmade, (b) it was a conspiracy to get rid of politically unpopular groups and (c) the Centers for Disease Control was lying about how it was transmitted.

And like Ebola, the community most impacted by it was greeted more with fear than with compassion.

For example, some believe that Ebola is President Barack Obama’s way of getting back at White people for slavery. Just ask radio host Rush Limbaugh…

“The danger we have now is that we elected people in positions of power and authority who think this or think like this in terms of this country being responsible, this country being to blame for things and it’s that kind of thinking that leads to opposition to shutting down airports from various countries,” Limbaugh said.

Not to be outdone, the Black community, which views all fatal diseases through the prism of the Tuskegee Experiment, in which scientists watched as a group of men slowly died of syphilis as they charted the disease’s progress, has its own conspiracy theorists, like, for example, singer Chris Brown.

“I don’t know…But I think that this Ebola epidemic is a form of population control,” Brown said via Twitter. “S—t is getting crazy, bruh…”

I wish that I could say that this was the worst of it, but I’d be lying.

So let me end by saying this.

You can only get Ebola from coming in contact with the bodily fluids of someone infected, or an infected animal. It is not an airborne disease, so you can’t get it from someone breathing in your general area — which means that closing the borders won’t help.

Hopefully, we’ll remember this for the next medical crisis.

Denise Clay is a journalist living in Philadelphia. 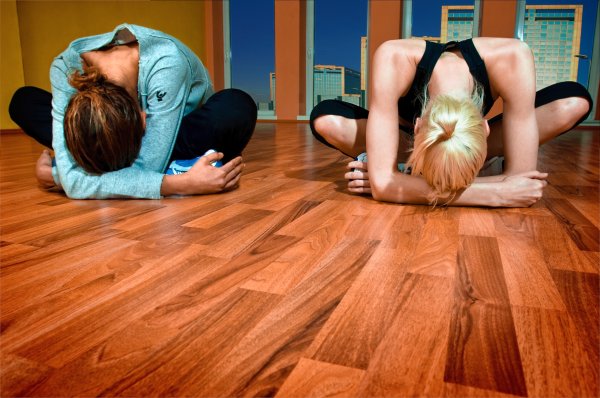 Why Women Are Crying at the Gym
Next Up: Editor's Pick