Before We Embrace Gwen Stefani's Comeback, She Owes Us An Apology

Gwen Stefani dropped her comeback song, “Baby Don’t Lie” today, and according to Pharrell (the unofficial arbiter of hits du jour), the follow-up album is on “another level.” And that’s all well and good, but before we embrace Stefani as a comeback queen, we should pause to remember that she perpetuated some extremely racist stereotypes when she debuted her first solo album Love. Angel. Music. Baby. 10 years ago.

Remember the Harajuku Girls? No? Here’s a refresher:

After dropping the album, Stefani used four backup dancers known as the “Harajuku girls” in all her performances and as an entourage offstage. They followed her everywhere and were reportedly contractually obligated to only speak Japanese in public. She renamed them — as if they were pets — “Love,” “Angel,” “Music” and “Baby” after her album title. As you can see in the video for the song “Harajuku Girls” above, the women are basically puppets. The lyrics of her actual songs aren’t much better. In “Harajuku Girls,” Stefani calls their culture, “A Ping-Pong match between Eastern and Western.”

At the time, comedian Margaret Cho compared the Harajuku girls to blackface and lamented how few portrayals of Asian culture there are in popular culture:

MadTV even mocked Stefani’s racism with a skit:

But other than those critiques, the pop culture world wasn’t vocal enough on Stefani’s appropriation of Asian culture for personal gain. Sure, 2004 was a different time — but it isn’t localized to that era: Stefani has a Harajuku Lovers line of fragrances and a Harajuku Mini fashion line for Target. Her obsession with the culture walks a very thin line between admiration and appropriation. It’s easy to wonder if Stefani had a hand in inciting what has now become a common cultural practice of white female pop stars using other races as props.

Last year, Miley Cyrus’ use of twerking black backup dancers at the Video Music Awards launched 1,000 think pieces on whether Cyrus was playing on black stereotypes to prove that she was now a rebel. Critics have also blasted Katy Perry for dressing up like a geisha with makeup that made her eyes look slanted during the 2013 American Music Awards. Earlier this year, Avril Lavigne released an extremely racist music video for “Hello Kitty.” Stefani’s behavior a decade ago set the precedent.

And it doesn’t look like Stefani learned her lesson: just two years ago, her band No Doubt had to pull the music video for their song “Looking Hot,” which featured band members playing a game of Cowboys and Indians. (In it, the very white Stefani dressed up like a Native American.) When Native American groups predictably called the video racist, the band apologized, saying, “Our intention with our new video was never to offend, hurt or trivialize Native American people, their culture or their history. Although we consulted with Native American friends and Native American studies experts at the University of California, we realize now that we have offended people.”

Stefani has not issued any such apology for her Harajuku girls. Maybe it’s time she does.

Read next: The Real Problem When It Comes to Diversity and Asian-Americans 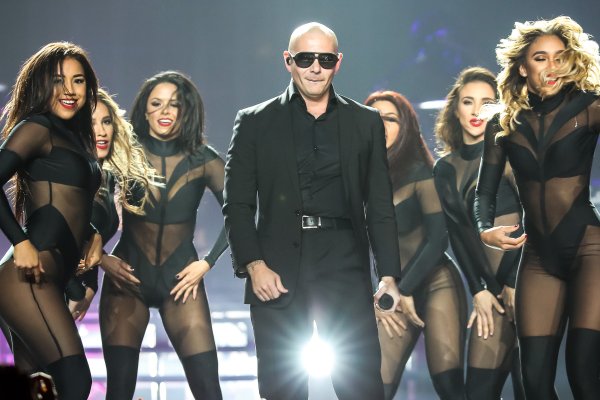 Pitbull to Host American Music Awards on Nov. 23
Next Up: Editor's Pick