Not published in LIFE. Oberwallstrasse, in central Berlin, saw some of the most vicious fighting between German and Sov
... VIEW MORE
William Vandivert—Time & Life Pictures/Getty Image
1 of 20
LIFE

After the Fall: Photos of Hitler's Bunker and the Ruins of Berlin

In the spring of 1945, as Russian and German troops fought — savagely, street by street — for control of the German capital, it became increasingly clear that the Allies would win the war in Europe. Not long after the two-week battle for Berlin ended, 33-year-old LIFE photographer William Vandivert was on the scene, photographing the city's devastated landscape — and the eerie, almost unfathomable scene inside the bunker where Adolf Hitler spent the last months of his life; where he and Eva Braun were married; and where, just before war's end, the two killed themselves on April 30.

Between August 1940 and March 1945 American, Royal Air Force and Soviet bombers launched more than 350 air strikes on Berlin; tens of thousands of civilians were killed, and countless buildings — apartment buildings, government offices, military installations — were obliterated. Vandivert, LIFE reported, "found almost every famous building [in Berlin] a shambles. In the center of town GIs could walk for blocks and see no living thing, hear nothing but the stillness of death, smell nothing but the stench of death."

Hundreds of thousands perished in the Battle of Berlin — including untold numbers of civilian men, women and children — while countless more were left homeless amid the ruins. But it was two particular deaths, those of Hitler, 56, and Eva Braun, 33, in that sordid underground bunker on April 30, 1945, that signaled the true, final fall of the Third Reich.

[See all of LIFE's galleries] 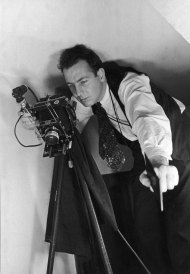 Vandivert (right, seen in the early 1940s) was the first Western photographer to gain access to Hitler's Führerbunker, or "shelter for the leader," after the fall of Berlin, and a handful of his pictures of the bunker and the ruined city were published in LIFE magazine in July 1945. A few of those images are republished here; most of the pictures in this gallery, however, never appeared in LIFE. Taken together, they illuminate the surreal, disturbing universe Vandivert encountered in the bunker itself, and in the streets of the vanquished city beyond the bunker's walls.

In his typed notes to his editors in New York, Vandivert described in detail what he saw. For example, of the fourth slide in this gallery, he wrote: "Pix of [correspondents] looking at sofa where Hitler and Eva shot themselves. Note bloodstains on arm of soaf [sic] where Eva bled. She was seated at far end . . . Hitler sat in middle and fell forward, did not bleed on sofa. This is in Hitler's sitting room."

Remarkable stuff — but, as it turns out, it's probably only about half right. Most historians are now quite certain that Braun committed suicide by biting into a cyanide capsule, rather than by gunshot — meaning the bloodstains on the couch might well be Hitler's, after all. On that late April afternoon in 1945, with his "Thousand-Year Reich" already in its death throes, Hitler shot himself in the temple.