You'll Never Guess What Chia Seeds Can Do To Your Esophagus

Chia, the superseed du jour, is all the rage for its abundant fiber and plant-based protein and fat. But swallowing chia seeds, warns new research presented at the American College of Gastroenterology Annual Scientific Meeting, should also come with a note of caution.

That’s because the seeds can absorb 27 times their dry weight in water—expanding in size so much that the thickened, gel-like mass got lodged in a man’s esophagus, sending him to the ER. The 39-year-old man swallowed a tablespoon of dry chia seeds and then chased them with water. When he did, he discovered he couldn’t swallow any of his own saliva. The man had a history of intermittent dysphagia—or the sensation of things getting stuck as he’s swallowing them.

How could a seed so tiny actually cause a blockage? “It got to be this sort of almost Play-Doh-like consistency, very hard in terms of a liquid but also sort of soft,” says Dr. Rebecca Rawl, MD, the gastroenterology fellow at Carolinas HealthCare System who helped treat the patient. None of her regular tools worked at dislodging it, so using a tiny endoscope meant for babies, she broke of little chunks of chia until it got small enough to push the whole thing through. “It was labor intensive,” she says.

MORE: The Truth About 6 “Superfood” Seeds

Rawl has seen plenty of things get stuck in the esophagus, but the obstructions are usually meat: things like steak, chicken and hot dogs. “Generally, vegetative matter and seeds at least can get broken down and slide through,” Rawl says, and the chia case was the first she’s heard of. “The popularity of chia seeds is growing, and I think this will come up more frequently,” she says.

You don’t have to swear off the smoothie-enhancer for good: just let them expand fully in liquid before eating or drinking them, Rawl recommends. 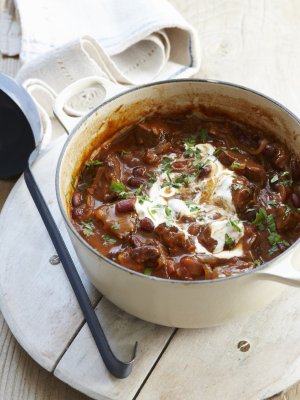 12 Superfoods That Warm You Up
Next Up: Editor's Pick