Kurdish people watch the Syrian town of Kobane from the Turkish border in the southeastern village of Mursitpinar, Sanliurfa province, on Oct. 19, 2014.
Bulent Kilic—AFP/Getty Images
By Naina Bajekal

Turkey said Monday that it will help Iraqi Kurdish fighters cross its border to fight militants from the Islamic State of Iraq and Greater Syria (ISIS) who have besieged a city in Syria.

“We are helping peshmerga forces cross into Kobani,” the BBC quoted Turkish Foreign Minister Mevlut Cavusoglu as saying in a news conference. He didn’t give any further details.

Turkey has come under pressure to increase its support for the international coalition fighting ISIS, and the announcement represents a significant shift from Ankara. Until now, Turkey has refused to allow Kurdish fighters to cross into Syria because of links between Syrian Kurds and Turkey’s own separatist rebels. The announcement came just hours after the U.S. made multiple airdrops of weapons, ammunition and medical supplies to Kurdish forces in Kobani, who now appear to be gaining the upper hand against ISIS. 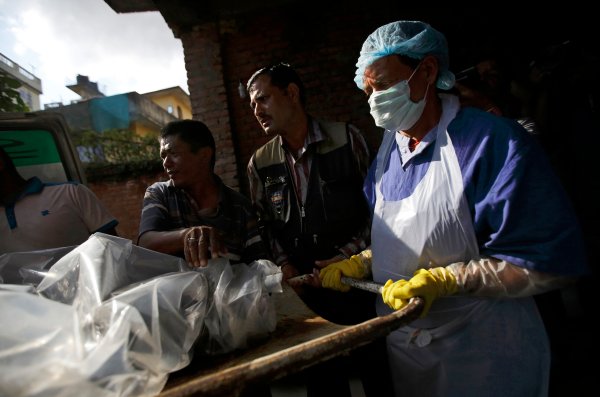 40 Dead in Nepal Blizzards
Next Up: Editor's Pick