Sweden's Military Scours for Possible Russian Submarine in Its Waters

Swedish corvette HMS Visby patrols the Stockholm Archipelago October 19 2014, searching for what the military says is a foreign threat in the waters.
Marko Savala—TT News Agency/Reuters
By Per Liljas

A large military operation is under way in waters off Stockholm to sweep for a “foreign underwater activity” widely speculated to be a damaged Russian submarine, in what could be the gravest violation of Sweden’s maritime sovereignty since the Cold War.

The intelligence operation, involving helicopters, minesweepers, corvettes, fast-attack crafts, a submarine and 200 service personnel, started on Friday, after a “man-made device” was sighted deep inside the Stockholm archipelago and encrypted radio communication was intercepted between that position and Kaliningrad — the base of Russia’s Baltic Sea fleet.

Sweden’s military said Sunday it had made a total of three credible sightings within two days and released an image taken by a passerby showing a partially submerged object, but has yet to comment on whether it is a Russian submarine. A suspicious black-clad man was also photographed wading in the waters outside the island of Sandön. On Oct. 2, a navy ship collided with an object in the vicinity, which some believe could have been a submersible that has since fallen into distress.

Intelligence expert Joakim von Braun told the Swedish daily Dagens Nyheter that the spotted object could be an advanced mini submarine of the model Triton-NN, and that the stranded crew could have hidden themselves on one of the many nearby islands while waiting to be picked up.

“It could very well be the case that a Swedish sleeper agent is activated since the embassy personnel is too monitored to carry out such a mission,” he said.

Russia has recently been increasingly bullish against its Baltic and Nordic neighbors, prompting some to speculate that they are trying to discourage these countries from deeper cooperation with NATO. In September, Russian fighter jets reportedly violated Swedish airspace, and Finland claims that the Russian navy harassed one of its environmental research ships in international waters last week.

However, maritime incursions have not been apparent since the 1980s, when Sweden’s military was frequently scrambled to investigate, and sometimes hunt, suspected Russian submarines in its waters. International law allows warships to cross maritime borders, while submarines may only do so while surfaced unless previous notification has been given.

Tomas Ries, a researcher at the Swedish National Defense College, says it would be a serious violation if a Russian submarine were located this far into Swedish waters.

“But if they are going on like this in Swedish waters it suggests that they are preparing something,” he adds, suggesting perhaps mines or reconnaissance equipment. Alternatively, says Ries, they may have “left something there during the Cold War that they want to update,” describing all explanations as “severe.” 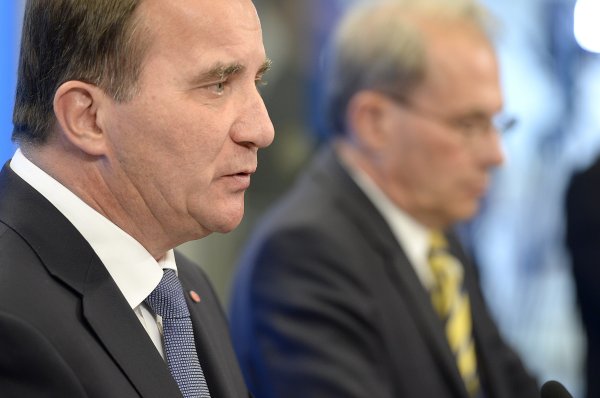 Sweden Among First to Recognize Palestinian State
Next Up: Editor's Pick