Hong Kong’s embattled leader Leung Chun-ying has accused the city’s pro-democracy movement of being aided by foreign elements, echoing the Chinese government’s attitude toward the demonstrations that are now entering their fourth week.

Leung told a local TV channel in an interview Sunday that the protests are “not entirely a domestic movement, as external forces are involved,” according to the BBC. The chief executive (CE), as Hong Kong’s leader is officially known, did not elaborate on which foreign elements he suspected of interfering.

Hundreds of thousands have thronged Hong Kong’s streets since late September to demand a revision of Beijing’s insistence on pre-approving candidates for the city’s next CE election in 2017.

Student leaders have also been vocal in their demands for Leung, universally known by his initials C.Y., to resign, accusing the 60-year-old of putting fealty to Beijing above the city’s needs.

The Hong Kong government had earlier announced talks with the protest movement’s leadership, a week after negotiations had been canceled at the last moment. The meeting is due to be held on Tuesday.

“To make a statement that there are foreign powers infiltrating this movement right before the discussions is evidence that C.Y. [Leung] is hoping to crack down on the entire movement,” said Alex Chow, head of the Hong Kong Federation of Students, one of several groups spearheading the protests. He condemned Leung’s statement as “irresponsible” and urged him to provide evidence.

Lam Cheuk-ting, the head of Hong Kong’s Democratic Party, called Leung’s latest comments “ridiculous,” as “we can see that the participants are all volunteers, they are not mobilized by any organization or any political party.”

“If C.Y. [Leung] has any concrete evidence, I hope he can provide it to the public and to the media,” Lam told TIME.

Lam said Leung’s statement seemed deliberate and tactical, since the CE may be seeking to foster Beijing’s support for a stronger crackdown on protesters. “I don’t think he is under pressure by Beijing, but this is his tactic to mislead the Beijing government,” Lam said. 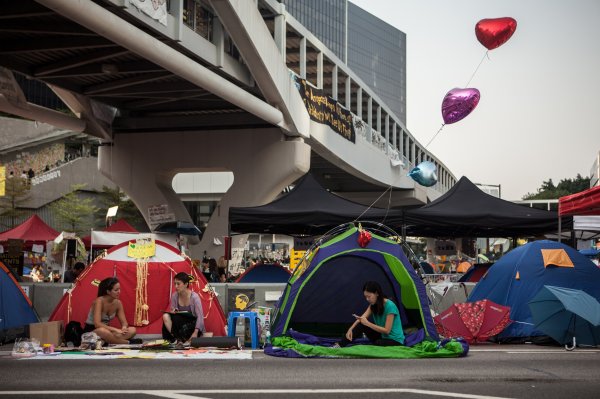 Hong Kong's Anarchism in Action
Next Up: Editor's Pick