Kurdish people watch jet-fighters fly over Kobani from the Turkish border in the southeastern village of Mursitpinar on October 19, 2014.
Bulent Kilic — AFP/Getty Images
By David Stout

U.S. aircraft delivered weapons, ammunition and medical supplies to Kurdish forces in the besieged Syrian border town of Kobani who’ve been battling the Islamic State of Iraq and Greater Syria (ISIS) for more than a month.

American C-130s made multiple airdrops over the embattled city on Sunday and met no resistance from ISIS forces on the ground, according to officials.

“These airdrops were conducted in support of Operation Inherent Resolve, the operation to degrade and defeat the terrorist group [ISIS] and the threat they pose to the region and the wider international community,” read a statement released by U.S. Central Command late Sunday.

During a conference call on Sunday night, a senior administration official confirmed that the White House had given the green light for the operation in order to provide the embattled Kurdish militia forces with the badly needed supplies.

“The President determined to take this action now,” the official told reporters.

To date, coalition aircraft have launched 135 air strikes targeting ISIS forces in Kobani. The aerial onslaught is believed to have helped reverse the battlefield momentum in favor of the Kurdish fighters holed up near the Turkish border.

Hundreds of ISIS fighters have been killed as a result of the air raids, thus allowing Kurdish forces to begin pushing the Sunni extremist group outside the city. However, scattered ISIS fighters are believed to be holding out in pockets of Kobani.

“[ISIS] is going to suffer significant losses for its focus on Kobani,” said the administration official.

The reinforcement of the Kurdish People’s Protection Units (YPG), as they’re known locally, by U.S. aircraft is likely to infuriate officials across the border in Turkey. Ankara has repeatedly refused to allow Kurdish reinforcements to enter Kobani because of the YPG’s ties to separatist rebels inside Turkey.

— With reporting by Zeke Miller / Washington 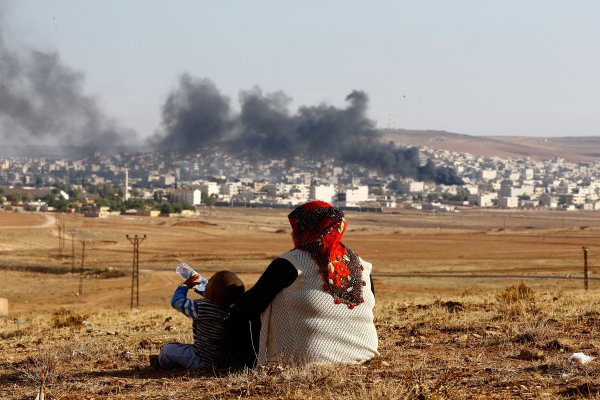 Kobani Struggles Amid Medicine and Food Shortages
Next Up: Editor's Pick