Members of the Occupied movement rest in their tents on a highway blocked by protestor barricades in the Admiralty district of Hong Kong on October 16, 2014.
ANTHONY WALLACE—AFP/Getty Images
By Elizabeth Barber / Hong Kong

Billy Fong is out of a job.

Until recently, this high school student had found a purpose helping Hong Kong’s demonstrators over the high median dividers cutting through their encampment in the city’s Admiralty district.

Yet, as the occupation of Harcourt Road enters its fourth week, getting over the concrete walls has become easy: protesters handy with tools have made several sets of wooden stairs for them, complete with handrails.

“I have somehow become useless,” says Fong, 17, standing idly at one such set of steps on a recent evening. “But it’s okay,” he said, shrugging his shoulders. “Now I have more leisure time.”

Call Fong’s job a casualty of this protest’s maturation from an uncertain settlement to a bona fide village—a transformation that smacks of pure anarchism. Not anarchy, meaning chaos, but classical political anarchism: a self-organizing community that has no leader.

Protesters in Hong Kong share a common goal of getting Beijing to agree to free elections for the Hong Kong government’s top job in 2017 (at the moment, Beijing is insisting on screening candidates). But no one is fully in charge of these demonstrations, and protesters are split over how to get their demand answered. A lack of leadership is widely cited as one reason why the conflict has not come to a resolution.

Yet leaderlessness has not stopped Hong Kong demonstrators from achieving social consensus at their biggest protest site in skyscraper-hemmed Harcourt Road (or Umbrella Square, as the protesters now call it). These days, the six-lane thoroughfare turned tent community is a microcosm of the city that hosts it except for one detail: it does not have a chief executive, as Hong Kong’s leader is called.

“We don’t have a central command to do anything,” says Daris Wong, 30, a paralegal manning a Cantonese-English interpretation booth, the latest in his string of self-appointed protest gigs.

“It’s maybe the not so good thing about these protests,” he says, “but it’s also the most beautiful thing.”

Over the past few days, Harcourt Road has acquired suburbs of camping tents. Most tents have numbers. Some are recognized addresses. A letter was recently delivered by the Hong Kong Post Office to tent 22, according to the Democratic Party’s Facebook page.

Protesters need not bring their own accommodation. Last Friday, Pat, a freelance graphic designer who declined to give her last name, opened registration at 8:30 p.m. for 67 tents donated to the supplies station she helps run. The assembled tents are called the Freedom Quarter, she said, handing a young couple waiting in line a list of rules: cleanliness is a must; checkout time is noon on Saturday.

Protesters bedding-in will find their stay clean, if not necessarily comfortable. Do-gooders ensure that public restrooms around the site are stocked with a mind-boggling assortment of toiletries, from face moisturizer to conditioning shampoo, many of them designer brands. Student volunteers mop out the facilities too, because the municipal cleaners can’t keep pace with the high numbers of people passing through the washrooms every day.

Roving trash collectors meanwhile bring waste to designated recycling areas, where the items are sorted and carted out to the city’s trash-collection stations.

“I saw that it wasn’t being done, and someone has to do it,” says Henry Ip, 23, a college student making one of his twice-daily rounds through the site with a plastic trash bag.

“It’s messy because I just got here,” says Isaac Hung, 24, a law student who works an informal day shift at one such station, gesturing to a sprawl of snacks and medical supplies. “Every shift, I fix it, and then I come back, and it’s all messy again.”

Hung’s supplies tent has two couches, mats that suffice as carpeting, and lighting fashioned from flashlights and saline solution bottles. A walkie-talkie on the floor crackles insistently. Supply stations use them to call on each other if one runs out of something

Conservation and consideration rule this camp. Wong, the paralegal, says he often tries to pass out lunchboxes to protesters, only to be turned down: “They say, ‘Save it for someone who needs it more,’” Wong says.

“So then I say, ‘O.K., but if you don’t take it, I will give it to the police,’” he adds. “Then, they take it.” As he speaks, students sitting in a sprawling study zone that the protesters have outfitted with desks, lamps, and power outlets, politely decline a volunteer stooping to offer them tiny cakes.

Like any village, this one also has its resident oddballs. One taciturn protester, wearing a skull-print ski mask pulled up to his eyes, passes plastic cups of soup to passerby. Glass bottles of beer bob inside in his big blue cooler. His area, furnished with a vase of sunflowers, is just one photographic opportunity for visitors wandering the protest village.

Art abounds, much of it inspired by the umbrellas that became the symbol of the movement after protesters used them to shield themselves from police pepper spray. There’s a tall statue of a figure holding out an umbrella that’s become the subject of countless Instagrams. A short distance away are exhibitions of photography and ink drawings. Tourists love to gather for photos in front of a long staircase leading up to the Central Government Offices that has become plastered with thousands of brightly colored Post-It notes, each bearing a message of support for the protesters. It’s been christened the Lennon Wall.

Not that life is always colorful here. Prominent pro-democracy figures — in fact anyone with something to say — give frequent lectures to considerable crowds, but “sometimes people get tired of public speeches,” says Ivy Chan, 40, a staffer for a Labor Party legislator and the organizer of nightly documentary screenings. She briefly interrupted a Friday night showing to let the sleepy-looking, supine crowd know she had found someone’s heart disease pills.

Meanwhile, a group of law students manning a tent for legal discussions were finding the hoped-for debates stymied by general agreement among those who stopped in. As Tilly Chow, 19, put it, “the people who are really against us aren’t here, and they don’t want to know what we have to say.” By midnight, the collective had drawn its tent door closed to discuss boiling a 60-something page legal analysis of the situation into something more concise.

Elsewhere, tents were faintly lit with the glow of Facebook’s smartphone app. A young man took a photo on his iPad of a young woman popping her head out of their newly erected tent and waited as she approved the pictures. Many people were already asleep, or at least trying.

Protesters, weathering criticism from conservative Hong Kongers and business owners tired of protests clogging major traffic arteries, have emphasized that this demonstration is not a jubilant sleepover. A sign posted in the main encampment reads: “Not a Party, is a Protest.”

Indeed, as midnight neared, three young women paused at a quiet, unclaimed plot of pavement and began unspooling tarp from a bag, looking anything but party-ready.

“This is not fun,” says Tracy Leung, 28, who works for a retail chain, holding a corner of the rumpled canvas, which she hoped would eventually be a tent, but did not yet look like one.

“No one likes to sleep on the street,” added her colleague, Carol Lee, 26.

But they had a critical role to play in this village, the three friends said.

“I’m here as one more body,” said Leung. “Because for every one less body here, it gets more dangerous for everyone else.” 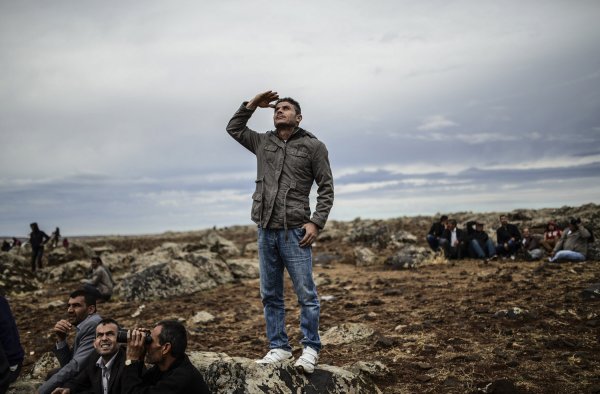