On Oct. 20, Indonesia inaugurates its first President truly of the people. Joko Widodo, known commonly as Jokowi, is unique in Indonesian presidential history because he comes from neither a politically elite nor a military background. Raised in a riverside slum, Jokowi ran a furniture-exporting business in the heartland city of Solo before he successfully ran for his hometown’s mayor in 2005. Two years ago, he was elected governor of Indonesia’s chaotic capital, Jakarta. Although he prevailed in the July presidential election against old-guard candidate Prabowo Subianto — a former general once married to the daughter of Indonesian dictator Suharto — Jokowi, 53, faces numerous challenges as he helms the world’s third largest democracy:

Political Gridlock: Jokowi may have claimed the presidency, but parliament favors Prabowo’s Red and White Coalition, which last month controversially blocked the direct election of governors, mayors and district chiefs. Instead of a popular vote, local legislatures will pick these leaders, preventing the rise of figures outside the political establishment, like Jokowi. Democracy advocates are strategizing how to roll back what some criticize as a legislative coup.

Economic Slowdown: With the commodity boom waning, Indonesia’s recent 6% annual growth looks harder to maintain. Jokowi promises 7% growth by 2018 by moving Indonesia up the value chain, improving logistics and positioning the world’s largest archipelago nation as a global transport hub. But will the populist President resort to the kind of resource nationalism that will spook foreign investors?

Religious Extremism: Indonesia hasn’t suffered a major terrorist strike since 2009 when a pair of luxury Jakarta hotels were targeted by suicide bombers. But it only takes one attack to shatter the sense that Indonesia has tamed a band of radicals who are trying to hijack the moderate, syncretic Islam that has long flourished in the world’s most populous majority-Muslim nation.

Dirty Bureaucracy: Jokowi won votes because of his pristine image and his anti-corruption campaign in Solo and Jakarta. He boasts of having cleaned up the once graft-ridden process by which government permits and licenses were granted. And he helped expand government coffers by enhancing tax collection. Can Jokowi promote transparency in a country notorious for corruption and bureaucratic inefficiency at every level of government?

Ethnic Relations: While mayor of Solo and governor of Jakarta, Jokowi picked deputies who happened to be Christian. In Jakarta, his No. 2 was also Chinese, an ethnicity that has suffered from race rioting. Although the sprawling island nation has maintained remarkable harmony given the diversity of its inhabitants, human-rights groups worry about a recent uptick in ethnic and religious intolerance. 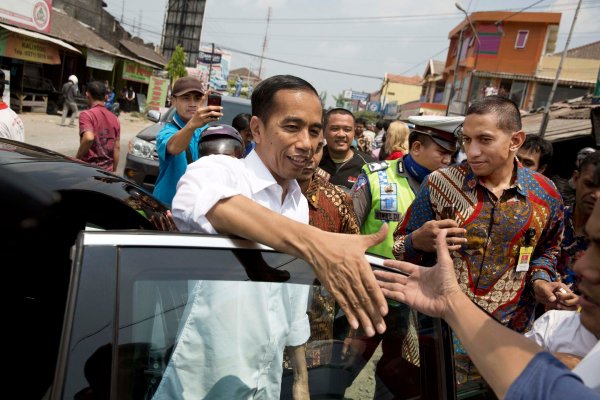 Meet the New Leader of the Fourth-Largest Country in the World
Next Up: Editor's Pick