Doctors and staff participate in a preparadness exercise on diagnosing and treating patients with Ebola virus symptoms, at the Ronald Reagan UCLA Medical Center in Los Angeles.
Reed Hutchinson—AP
By Zeke J Miller

The U.S. military is forming a 30-person medical team to prepare to respond to additional cases of Ebola in the United States, the Pentagon announced Sunday.

“In response to a request from the Department of Health and Human Services—and as an added prudent measure to ensure our nation is ready to respond quickly, effectively, and safely in the event of additional Ebola cases in the United States—Secretary Hagel today ordered his Northern Command Commander, Gen. Chuck Jacoby, to prepare and train a 30-person expeditionary medical support team that could, if required, provide short-notice assistance to civilian medical professionals in the United States,” Kirby said.

The team will begin specialized training in infection control and the use of personal protective equipment within the next week, at Fort Sam Houston.

“Upon conclusion of training, team members will remain in a ‘prepare to deploy’ status for 30 days, available to be sent to other [contiguous United States] locations as required,” Kirby said. “They will not be sent to West Africa or elsewhere overseas and will be called upon domestically only if deemed prudent by our public health professionals.”

Up to 4,000 American troops are being deployed to assist in responding to the Ebola epidemic in West Africa, but they are not involved in direct patient care.

The Pentagon team formation follows last week’s Ebola diagnosis of a second health care professional in Dallas, the third confirmed case of the virus in the United States, causing public concern about the spread of the disease to reach new heights.

The virus is only spread through direct contact with the bodily fluids of those who are symptomatic with the disease.

“There aren’t absolutes. Nothing is completely risk-free,” he said. “But the relative risk of things, people need to understand, is very, very small.” 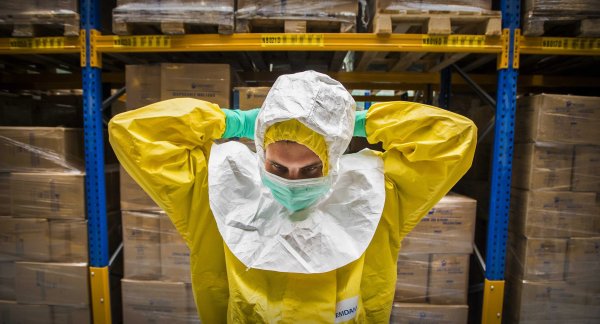