Fresh Clashes in Hong Kong As Thousands Take to the Streets

Protesters are pepper sprayed by riot police during a confrontation at Mongkok shopping district in Hong Kong Oct. 17, 2014.
Bobby Yip—Reuters
By Per Liljas

Thousands of people in Hong Kong recaptured a protest site Friday night that was cleared by police just a few hours before, in a show of force by the almost three-week-old movement demanding greater democratic rights.

Hundreds of police officers attempted to keep the boiling crowds in the Mong Kok area at bay, many times with the use of batons and pepper spray, but to no avail. Around midnight, a canopy of umbrellas—an icon for the protest movement—triumphantly started moving down the thoroughfare of Nathan Road, trailing scores of retreating police officers.

“This sends the message that we can’t be suppressed or bullied, we will fight back,” said 17-year-old high school student Joel Christian Banerjee Dilan on the front line. “We’re not scared anymore.”

Since Sept. 28, protesters have occupied three areas of Hong Kong with the help of roadblocks and camping sites. They’re demanding the right for citizens to nominate their political leaders, but have so far received no concessions from the government. As their numbers started dwindling over the past week, authorities grew emboldened and became more aggressive trying to clear the protesters. But scenes of police violence have incensed the population, and boosted support for the protesters’ cause.

On Friday morning, police expeditiously tore down the barricades and tents of the Mong Kok protest site, leading to a call on social media to recapture the lost ground in the evening. As thousands of people bore down on the neighborhood, some cited anger with the police force as one of the main reasons they had shown up.

Joel Christian Banerjee Dilan said not all officers were aggressive, but that the actions of a few were affecting the corps as a group. Ling Cheng, a 26-year-old wedding consultant, said she had never been afraid of the police, even though she always brings her protective goggles to the protests. “But I’m scared of the police now, they’re so rude,” she said.

Others said they were there because of the tactical use of the Mong Kok site.

“If we lose Mong Kok, then all the police can go to [the central site in] Admiralty,” said 26-year-old environmental engineer student Kwong Leong. “Then everything might be lost.”

The evening was fought on several fronts, as both sides tried to gain new ground as well as hold what they had already grabbed. With throngs of increasingly frustrated people spilling into alleyways adjoining the central boulevards, it was often a losing battle for the police. At the front line on Nathan Road, they whacked indiscriminately at the wall of umbrellas poking in their direction, dousing it with pepper spray—but had no alternative other than to fall back when protesters poured in from their sides.

Scuffles and heckling continued well into the first hours of Saturday on the fringes of the protest, with incidents involving police officers in riot gear drawing scattered roars from around the neighborhood. Some were busying themselves with erecting new barricades. Inside, on the newly occupied swathe of asphalt, several sleeping mats had already been carried in, aiding protesters to a moment of rest after several hours of tense altercations.

Police officers also took turns sitting down and having something to eat, the two groups curiously at ease in each others vicinity once not pitted eye-to-eye on a front line. It’s a few moments of well-deserved comfort, seeing that clashes erupt with increasing regularity.

Calvin Chung, 25, was busy raising a tent, even though he professed to not knowing how. “I’m a little bit afraid of violence during the night, but I get my courage from the people. You see,” he gestured around him.“I’m not alone.” 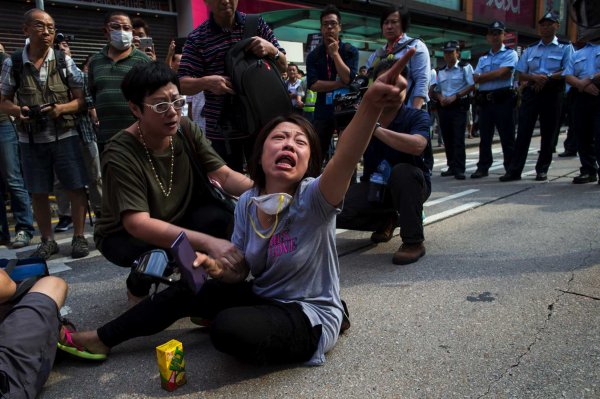