Martin Short is having a bit of a moment. His memoir, I Must Say: My Life as a Humble Comedy Legend, is out in November, and he’s earning huge buzz for playing a drugged-out dentist in the upcoming Paul Thomas Anderson film, Inherent Vice. Right now, you can see him on Mulaney, the new Fox sitcom starring stand-up comic John Mulaney. Short plays Mulaney’s boss, Lou Cannon, a narcissistic TV game-show host who comes on to female guests and obsesses over how his eventual death will be covered on TV. “He’s a moron with power,” says Short, 64. “Those people are my specialty.”

It’s surprising that it’s taken you this long to become a regular on a sitcom.
Actually, my first job in America was a small role on a James L. Brooks sitcom called The Associates [in 1979]. It didn’t last a season. Then I was on another sitcom called I’m a Big Girl Now, which was about a think tank in Washington – but then, suddenly, by episode 12, we’d become a newspaper. No explanation whatsoever.

SCTV came soon after that, and SNL a little while later, so I found myself doing stuff that was either a late-night show or, eventually, the movies. At a certain point when you’re not struggling for rent money, you have the luxury of keeping yourself intrigued by something. The idea of being a regular on a series felt limiting; you know, you’re on a TV show every week, and that’s what you do. The eclectic nature of being able to do a sketch show and then a movie and then go out and do live shows with Steve Martin for a bit — that intrigued me.

However, Lorne Michaels, who I have a huge amount of respect for, called me up and said “You know, I know you’ve never really done something like this before, but John [Mulaney] is a great guy and I think you want to be part of this.” Once I met John, I got what he was saying. It made perfect sense. The voice of that show is very specific.

How would you describe Lou Cannon?
Lou can’t comprehend why people wouldn’t be constantly thinking about what’s most important in life – which is Lou and his well-being.

Is the character based on anyone in particular?
President Harry Truman. [Laughs] Oh, I don’t know. Every character I’ve done has been based on one or two specific people, but then they’re colored by many, many other folks. It’s the same with Lou. He’s more of a type.

But you know, I do have famous friends who I’ve sat with over the years, and they’ll go on and on about themselves for so long that — since you tend to drift when these conversations take place — I wonder what they would think if they saw a transcription of this exchange. I think they’d be stunned. It’d be me going “Uh-huh” and then pages and pages of them droning on. [Pause] That’s my long-winded way of saying I’m not telling.

He’s essentially sort of a descendant of Jiminy Glick [the preening, clueless fake talk-show host Short played on Primetime Glick], who once said, ”You know, the problem with Charlie Rose as an interviewer is that he listens.” Lou would agree.

You originally came up with Glick when you were doing an actual talk show, right?
It was a syndicated talk show, and I wanted to create a celebrity interviewer who could go to junkets and looked nothing like me, so that people literally wouldn’t recognize it was me. Since my show was being broadcast at all sorts of different hours, including during the day, I thought, Well, I’d better take a look at daytime TV and see what it’s like. These were the pre-Ellen days, mind you; Rosie [O’Donnell] was on, and that was cool. But other than that, it was mostly people with large staffs and huge budgets who had no business being on TV whatsoever. To me, the notion that they’d be terrifying to the people who worked for them and that there would be some production assistant who’d be scared that they’d messed up someone’s tuna-fish sandwich order made me laugh. That’s where Glick came from.

He keeps a very relaxed, cool vibe on his sets, which is something he and Mulaney have in common. You have some actors where they need the World War III of it all to be creatively juiced; unnecessary tension stifles my creative instincts. I just find that to be such pretentious bullshit. But those guys aren’t like that at all. They keep it loose. The best stuff happens that way.

SNL is coming up on its 40th anniversary. Do you have fond memories of your time on the show?
I was on during the Dick Ebersol years – or the George Steinbrenner years, as we called them, since that was when he brought in a bunch of players who were already well-known and gave us one-year contracts. You’ll get horror stories from some folks, but I was treated like a prince.

My situation, of course, was very different. Having just come out of doing SCTV for three years, there was a part of me that really wasn’t sure whether I wanted to jump back in to something like that. Dick called me up and said “We’d love to have to have you on the show for the next year, along with Billy Crystal and Christopher Guest.” I thought, well, they certainly aren’t going to do it, so I said “Hey, as soon as they agree, phone me, Dick!” I figured I was safe until they’d called a press conference announcing those guys had joined, so I jumped aboard at the last minute.

Since I knew I was only going to be there for a short time, I treated every show like a stand-alone TV special. I drove myself crazy, putting all this pressure on myself, so it was like final exams every week. That’s my only regret, that I didn’t enjoy it a bit more or be a little more open to the idea of staying for a few seasons and seeing what I could have done with it more.

Is there a surefire way to get a laugh?
You know, I had done some stage work in the Seventies and was a funny guy at parties but having to come up with it on demand? But as I watched a bunch of my friends go to Chicago when Second City opened up a sister company in 1973 — people like John Candy, Eugene Levy, Gilda [Radner], Danny [Aykroyd] — and thought, well maybe I could do that. It still took me four years to join them, of course.

But what I quickly leaned was that it was usually the reaction that got a laugh. The fact that you could have a drycleaner sketch and you could say “I cleaned your stain out, mister” — and if you said it right, you could get a laugh. When I first played Ed Grimley at Second City, I’d stick his hair straight up to try to make [scene partner and Danny’s younger brother] Peter Aykroyd laugh. Then the audience laughed too. So, basically, a funny look is a surefire way to get a laugh. That, and falling down.

Lou’s ideal last words are “I did it for the laughs”. What would yours be?
Something more practical: ”Pass me a tissue,” maybe. ”Could you hold this for just a second?” 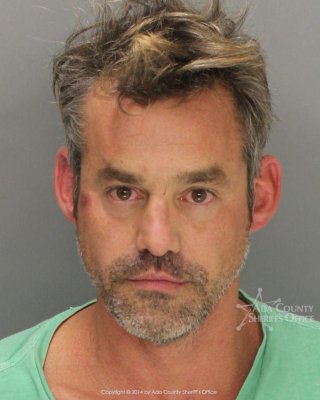 Buffy the Vampire Slayer Star Arrested
Next Up: Editor's Pick