Turkish Kurds watch as smoke rises over the Syrian town of Kobani after an airstrike, October 18, 2014.
Kai Pfaffenbach—Reuters
By Piotr Zalewski / Suruc, Turkey

In some neighborhoods, the streets are littered with the bodies of militants from the Islamic State of Iraq and Greater Syria (ISIS), said Mohammed, a 42 year old Kurdish fighter, describing the aftermath of days of U.S. airstrikes in and around the besieged Syrian city of Kobani, just a few hundred yards from the border with Turkey. “Normally, if we have time, we try to bury them, but now, because of the new clashes, we cannot,” he said on Friday, speaking to reporters over the phone from the city center. “You can now smell the carcasses.”

A fighter for the People’s Protection Units (YPG), the Kurdish militia defending Kobani, went on to describe the increasingly harrowing conditions inside the city, which has been holding out against an ISIS onslaught for more than a month. “We lack drinking water, milk for infants, and medicine,” he said. “We had three hospitals in the city, but ISIS destroyed all of them. Now we have one mobile clinic, but all it has is antibiotics.” Yet Mohammed, who asked that his last name not be made public, remained upbeat. “If the airstrikes don’t stop,” he said, “we will have victory in ten days.”

The YPG has received a big boost from the U.S. airstrikes but continues to fight with its back to the wall, said Ismet Sheikh Hasan, the city’s defense chief. Except for a single, now temporarily closed, border crossing with Turkey, Kobani remained cut off from the outside world, he said, while ISIS fighters are able to receive reinforcements from their strongholds inside Syria.

“The strikes are very good, but they’re not enough,” Hasan said, “because ISIS is hiding in the houses and in the streets, and we need heavy weapons to go after them and defeat them.”

In recent days, he added, even the narrow lifeline connecting the city to Turkey had come under threat, making it difficult to evacuate wounded fighters and several hundred stranded civilians. From a hill south of Kobani, ISIS tanks and artillery guns were shelling downtown neighborhoods and the Mursitpinar border crossing. Snipers were targeting the area as well.“They’re trying to control the main gate to stop our injured from reaching Turkey,” he said.

“We’ve prepared for such days,” said Luqman Ahmad, a civilian speaking to reporters by phone from Kobani. He and others inside the city center were eating whatever they had stored, mostly canned foods, he said, as well as livestock left behind by the tens of thousands of locals who fled to Turkey over the past month. “We’ve had to break into the houses of neighbors who’ve left, and to take their food.”

Artillery fire echoed on the Turkish side of the border as he spoke. Two coalition fighter jets circled above Kobani.

As night descended on Kobani on Friday, Hasan, the defense chief, sounded a glum note. Thanks to the airstrikes, the YPG was holding its ground, he said, but remained unable to make progress. “The balance is shifting in ISIS’ favor,” he said.

Minutes after he spoke, heavy clashes broke out to the east of the Kobani. In Caykara, a small Turkish village less than a mile from the border, locals crowded the roof of a mosque, listening to the unrelenting cackle of gunfire and the thump of artillery shells. Red tracer rounds dashed from the city center toward ISIS positions on the outskirts. A single fighter jet buzzed overhead, obscured by the darkness and the thick clouds hovering above Kobani. Rain started to fall. 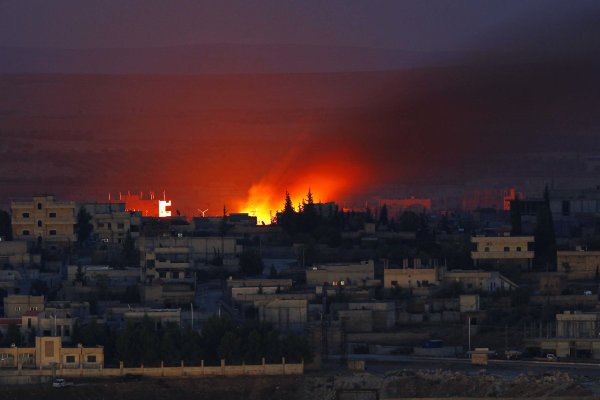 ISIS Retreats From Syrian City
Next Up: Editor's Pick