Two Democrats in hard-fought Senate races bucked the Obama Administration and health experts Friday, announcing their support for increased travel restrictions on flights from West Africa because of the Ebola outbreak there.

North Carolina Sen. Kay Hagan and Georgia Senate candidate Michelle Nunn backed the travel ban as Republicans are increasingly criticizing the Obama Administration over its handling of the crisis, which has now led to three cases of the deadly disease being diagnosed in the U.S. Both their Republican opponents have been vocal in backing a travel ban.

“I am calling on the Administration to temporarily ban the travel of non-U.S. citizens from the affected countries in West Africa,” Hagan said in a statement Friday. “Although stopping the spread of this virus overseas will require a large, coordinated effort with the international community, a temporary travel ban is a prudent step the President can take to protect the American people, and I believe he should do so immediately.”

The statement marked a turnabout for Hagan, who said Wednesday that a travel ban is “not going to help solve this problem” and “not going to contain the epidemic.” Hagan’s opponent, North Carolina House Speaker Thom Tillis, seized on the apparent flip-flop. “When I came out strongly for an Ebola travel ban, Sen Hagan said it wouldn’t help,” he said on Twitter. “Now she agrees with me?”

A few days after Nunn’s opponent, businessman David Perdue, called for “immediate flight and travel restrictions,” Nunn said she supported a “temporary travel ban” to affected countries in West Africa with an exception for military and health workers.

Experts widely agree that travel bans would only make it more difficult to contain the outbreak in West Africa by hampering aid efforts.

Hagan and Nunn are fighting in two of the closest Senate races in the country. 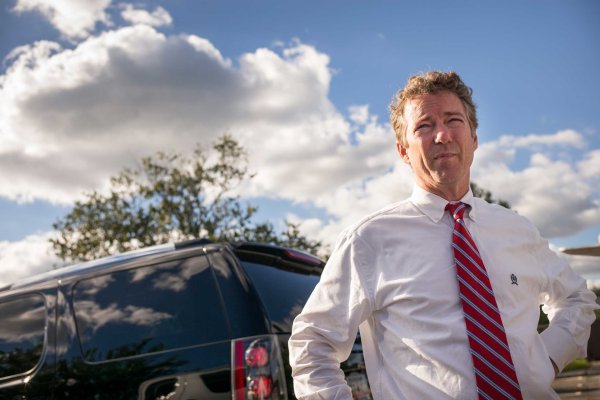 On the Road with Rand Paul
Next Up: Editor's Pick