Members from Hong Kong's South Asian community take part in a protest for democracy on October 9, 2014 in the Central district of Hong Kong.
Holing Yip
By Rishi Iyengar / Hong Kong

Jeffrey Andrews, a 29-year-old social worker of Indian origin, got a call from a Pakistani friend on the night of Sept. 28, when thousands of Hong Kong people, many of them students, had begun to occupy the streets to demand greater democracy. “What are we doing?” his friend said. “We should be out there with the students, this is our city.”

Andrews agreed, and the next day they mobilized a group of about 35 of their peers, printed banners that read “Hong Kong is our home, we ethnic minorities strive for democracy” and headed to Admiralty, the main protest site. Andrews admits that he was unsure what kind of reception and acceptance they would get from the ethnically Chinese crowd.

“As soon as we got out with our banners people just applauded, and we were so encouraged,” he said. And they’ve been going back there every night since then.

Tens of thousands of Hong Kongers have flooded the streets since the end of September, defying Beijing in a protest that is widely seen as the most politically significant movement in China in more than two decades. Among the crowds are many non-Chinese, who insist that they too belong to the Umbrella Revolution, as the protests are being called, and that it belongs to them.

“Of course it is our movement,” says 19-year-old Kenny Omar, born and brought up in Hong Kong but Somali by origin. “We’re born here, we’re citizens, we support them.”

“This is just as much my city as it is anyone else’s,” says Nick, 23, a filmmaker of Indian origin who did not wish to give his last name. “I think the movement is way past race and ethnicity, it’s deep down in the core of humanity.”

His friend Kamal Mirwani, a travel writer who proudly sports the iconic Hong Kong skyline as a tattoo down his right leg, says the drive for full political rights has real urgency. “This is our chance — this is the only chance we get,” he says.

According to the 2011 census, Hong Kong is home to over 450,000 people of non-Chinese ethnicity, making up 6.4% of its total population. Some, like the Indians and Parsis, trace their roots back to the founding of modern Hong Kong as a British colony in 1841, when they were drawn by the fledgling settlement’s possibilities for trade. Others, like the Pakistanis and the Nepalese, came to provide the policing and military muscle of what was then an outpost of the Raj. Still later communities — like the Indonesians, Thais and Filipinos — came in large numbers to do domestic work as Hong Kong prospered into a global financial hub.

A few non-Chinese, particularly from the South Asian community, have become fabulously wealthy. But in general, Hong Kong’s minorities often face various problems, particularly in the fields of education and employment. According to government statistics, nearly two-thirds of the ethnic minority population earns less than $500 a month, in a city where the median income is more than three times that.

For several of them, supporting Hong Kong’s democracy campaign takes precedence over their pocketbook woes. “I think with this movement right now, it’s so important that we’re focused on the development of democracy, that we’re not really talking explicitly about other issues,” said Holing Yip, research officer for ethnic minority advocacy group Hong Kong Unison. “People are noticing ethnic minorities being a part of Hong Kong, being participants.”

Yip points out that ethnic minorities have always been involved in protest movements in Hong Kong, but says that she has seen an overwhelming sense of solidarity that sets the Umbrella Revolution apart.

“They really see this as a movement that they need to be a part of,” Yip said.

Or at least most do. Others prefer to adopt a neutral stance. “It’s not my job to keep track of what’s happening,” said Mohammad Noor, a 63-year-old Bangladeshi who has lived in Hong Kong for nine years and sells snacks, dates and prayer caps outside the Kowloon Mosque and Islamic Centre. “I think it is injustice to spoil this country,” he said. “It’s giving us a place to stay and work.”

Andrews says his group has faced some opposition of this nature, especially from older members of the community. “All of them say they’ve worked so hard to establish their businesses, and ask why we’re going against the flow of things,” he says. “Many of the Pakistanis even say their country has a great diplomatic relationship with China, that we’re going out and ruining it.” But he also says that negative comments make up only a sliver of the reaction they have encountered.

Unison’s Yip also detects a degree of fatalism. “One of the retorts would be ‘Even if the majority Chinese come out and they can’t do anything, what makes us feel like we can?’” she says. “But the others will say, ‘We are a part of this, if they are helpless, we are helpless too.’”

Nick, for his part, admits that he may not entirely subscribe to the ideology of the movement. But he says that’s irrelevant. “It’s less about whether I believe exactly in what’s going on, but I would be out there because I feel like it would affect the people of my city in the right way,” he says. “That’s why I’d be out there, to support them asking for what they believe is the right thing.”

As the movement enters its fourth week, it’s becoming increasingly clear that — regardless of ethnicity — anyone who wants to get beneath the umbrella is welcome. 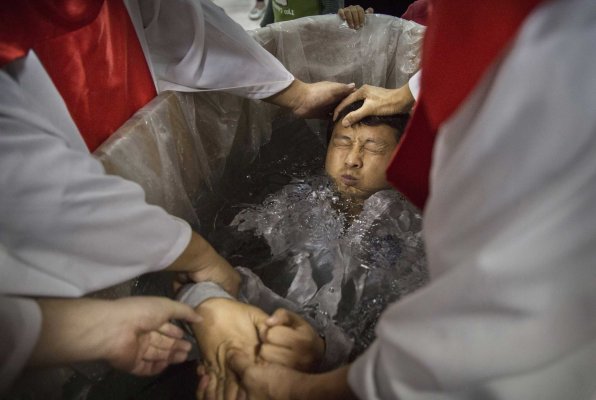 Go Inside an Underground Church in China
Next Up: Editor's Pick