A man dressed in protective hazmat clothing treats the sidewalk in front of an apartment where a second person diagnosed with the Ebola virus resides, in Dallas, Texas.
Mike Stone—Getty Images
By Elizabeth Barber

A Dallas hospital employee, described as possibly having come into contact with fluid samples from the deceased Ebola patient Thomas Eric Duncan, left the U.S. on a cruise ship on Sunday, the State Department said early Friday morning.

The news follows the announcement of plans to keep at home all health care workers flagged as having encountered Duncan or his fluid samples, in an aggressive effort to contain the virus’ spread in the U.S. after a Dallas nurse was allowed to take a commercial flight just before getting diagnosed with Ebola, the Guardian reports.

Any of the workers who refuse the sign the agreement would be subject to a legal control order, Jenkins said, though he added: “These are hometown healthcare heroes…They’re not going to jail.”

The State Department said the hospital employee who boarded a cruise ship from Galveston, TX, did not have direct contact with Duncan, but “may have processed the since deceased patient’s fluid samples.”

The unidentified employee, who was checked by a doctor on the cruise ship and is self-monitoring, does not have any symptoms of illness, according to the State Department. The employee and his traveling companion have agreed to a self-imposed quarantine in their cruise cabin.

“We are working with the cruise line to safely bring them back to the United States out of an abundance of caution,” read the statement.

The employee would have come into contact with the sample 19 days ago, according to the White House. Ebola symptoms can appear 2 to 21 days after initial exposure, according to the Centers for Disease Control (CDC), but on average they manifest 8 to 10 days after the illness is contracted.

U.S. officials have been rushing to contain the spread of Ebola after two Texas Health Presbyterian Hospital nurses who treated Duncan, Nina Pham and Amber Vinson, tested positive for the illness.

Numerous parties have been trading barbs over where to put blame for the infection of the two nurses and for the growing number of people who are believed to have come into contact with them and Duncan.

National Nurses United, a union not affiliated with Texas Health Presbyterian Hospital, has excoriated both the hospital and the CDC for failing to enact proper standards for treating the contagious patient and for keeping the hospital’s nursing staff safe.

But the hospital has bristled at charges that it failed to protect its nurses and in a statement on Thursday put fault with the CDC for constantly changing its guidelines and failing to set clear protocols for treating Duncan.

U.S. lawmakers at the House hearing on Thursday also chastised the CDC for allowing Vinson, the second Dallas health worker to test positive for Ebola, to fly from Cleveland to Dallas after she self-reported a mild fever but had not yet been diagnosed with the virus.

Meanwhile, the international community is still reeling over how to contain the worldwide spread of Ebola, which has killed 4,493 people and is believed to have infected 8,997 in seven countries, according to the most recent WHO estimates.

The situation in Liberia, Guinea, and Sierra Leone, is “deteriorating, with widespread and persistent transmission,” the WHO said Wednesday, in its latest status update. Cases have been spiking in the Guinean capital of Conakry, the health organization said.

On Thursday, United Nations chief Ban Ki-moon urged U.N. member states to donate to the world body’s trust fund for Ebola, which currently stands at a lowly $100,000—all of it from just one nation, Colombia, and a pathetic fraction of the $1 billion the U.N. has said it needs to stop the outbreak, the BBC reports.

World governments have in total pledged just $20 million to the fund. 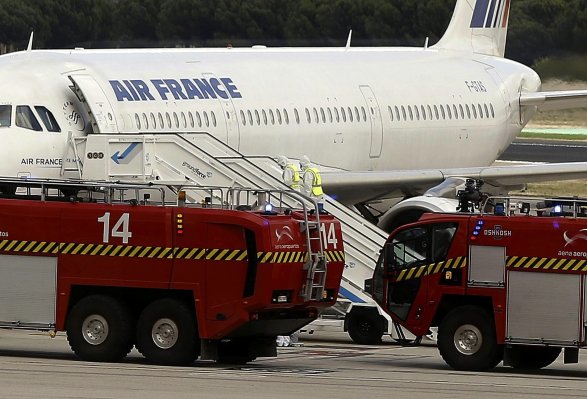 Ebola: Flight Grounded in Madrid
Next Up: Editor's Pick