There were three big dates on Apple’s calendar this year. The first was June’s WWDC, where it presented iOS 8 and OS X Yosemite, the second was a surprise event last month that presented us with the iPhone 6, iPhone 6 Plus and the Apple Watch. Thursday marked the third, and Apple got out the big guns in the run up to the holiday shopping tablet rush – the iPad Air 2 and iPad mini 3.

We went hands-on with the two new tablets to find out what’s new.

The first thing you notice when picking up the iPad Air 2 is that it’s a lot slimmer and lighter than previous models. The iPad Air was last year’s best-designed tablet, but Apple has improved on it by carving 1.4mm from the already slender slate. It feels like a tablet you can hold for hours without getting tired, and it’s perfectly balanced whether you’re in portrait or landscape mode.

Battery life is always a worry with slim tablets because they have less room for, well, batteries — but Apple promises that the Air 2 will have the same 10-hour stamina of its predecessor, a claim we couldn’t verify during our limited hands-on time Thursday.

It’s not just the body that’s had a tweak. The screen has also had a major upgrade, but not the one many observers thought was coming. The resolution remains the same, and that’s no bad thing – the iPad Air is plenty sharp. What Apple has done is fuse the different components of the screen together, eliminating all air gaps. So what, you might ask? Well, aside from helping reduce the thickness of the overall body, that process also means the screen is less reflective. Coupled with an anti-reflective coating, Apple claims that the iPad Air 2 is the least reflective tablet in the world. That’s good news if you like using your tablet outdoors, and it also makes images look like they’re almost painted onto the glass.

All these, however, are iterative improvements — there’s nothing radically innovative on the new iPad. One new feature for the iPads is Touch ID, a feature Apple introduced on the iPhone 5S that lets you access your phone with your thumbprint rather than a four-digit passcode. On an iPhone, Touch ID is fantastic, and within a few days of use you wonder how you ever lived without it. We’re not convinced it’s quite as compelling on a tablet, though. You don’t unlock tablets with as much regularity and they’re not at constant risk of loss or theft like your phone, which is always out and about with you.

But Apple hasn’t included Touch ID on the iPad Air 2 and iPad mini 3 for the sake of unlocking them with ease — this is a big retail play. Touch ID is integral to Apple Pay, which is in part a slick and easy way to buy products online with the touch of a finger. Judging from how many more apps we buy since Touch ID purchasing was introduced to the App Store, we think this could eliminate multiple drop-off points in the buying process. No wonder retailers are clamoring to get on board – these tablets are the highest-tech shopping carts around.

The iPad Air 2 also got a new processor. This isn’t like the slightly tweaked iPhone 5S chip we saw on the iPad Air. Instead, Apple has designed it specifically for the iPad Air 2, and Apple claims some staggering performance improvements – up to 40% better CPU speeds and 2.5 times the graphical grunt. That’s big news if you edit photos or videos on your tablet or if you’re a mobile gamer.

To take advantage of the extra power, Apple has also upgraded the iPad Air 2’s iSight camera. It’s now an 8-megapixel affair, but the real benefits come from additional software features. You get all the tricks that iPhone users have enjoyed for a while. There’s time-lapse, burst shooting and the impressive slo-mo video capture.

The iPad mini 3 is less interesting than its bigger cousin — It’s essentially last year’s tablet with the inclusion of Touch ID.

Both of Apple’s new iPads look and feel great on first play. They will likely remain the tablets to beat in terms of quality and usability, but Apple had another surprising announcement. The iMac, Apple’s all-in-one desktop, got a refresh. It looks the same in terms of design, but the highest-end model now packs an incredibly sharp 27-inch 5K Retina display. The sharpness is immense — it will make graphic designers froth at the mouth with anticipation. 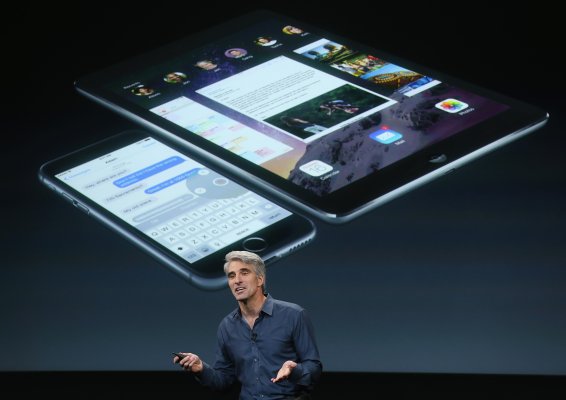